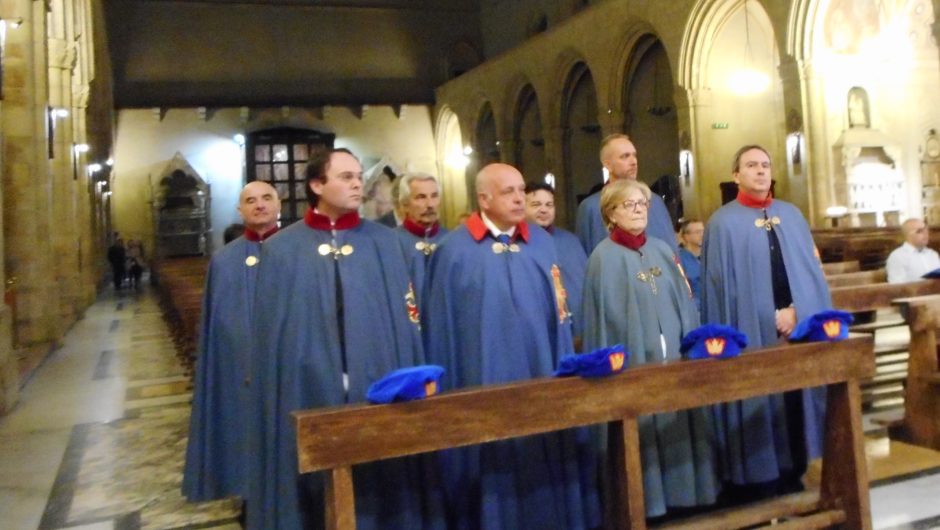 NAPLES AND CAMPANIA: HOLY MASS ON THE OCCASION OF THE CELEBRATION OF SAINT CHARLES

On the occasion of the celebration of Saint Charles, the Knights and Dames of delegation, including many Guard of Honor volunteers, celebrated a Mass at the Basilica of Saint Claire in Naples in tribute to King Charles and King Francis I. The Knights paid tribute to HRH the Duke of Castro, Head of the Royal House and Grand Master, recalling the many charitable activities he has carried out and which still carries out.

NAPLES AND CAMPANIA: HOLY MASS IN MEMORY OF MARIA SOPHIE OF BOURBON AND OF FERDINAD IV

On October 10th, 2019, the Knights, Dames and volunteers of the Honor Guard of the Holy Order gathered in prayer at the Basilica of Santa Chiara in Naples for a Holy Mass in memory of Queen Maria Sophie of Bourbon and of King Ferdinand IV. Soldiers of the King’s First Regiment, a cultural recreation association, also participated in the celebration.

NAPLES AND CAMPANIA: HRH THE GRAND PREFECT IN PIETRARSA

On October 5th, commemorations were held at the National Museum of Pietrarsa, in memory of the 180th anniversary of the inauguration of the peninsula’s first railway, which was made by Ferdinand II of Bourbon.

HRH Princess Beatrice of Bourbon Two Sicilies, Grand Prefect of the Constantinian Order, visited the Pietrarsa Museum and was accompanied by Marquise Federica De Gregorio Cattaneo, the General Director of the Fondazione Ferrovie dello Stato, Ing. Luigi Francesco Cantamessa Armati, the museum’s director, Oreste Orvitti, the president of the ENEA research center in Portici, Dr. Aldo Parisi, the head of the philatelic sector of the Italian post office, Dr. Maria Grazia Paris, who have made a special obliteration for the occasion, and by some Knights of the Order.

During the visit to the various pavilions of the Museum, the caretakers recalled the history of the place and described future projects for the historical and cultural improvement of the site, which has reached an international importance.

Naples, September 19th, 2019 – A big group of Knights and Dames of the delegation of Naples and Campania participated, with their mantles, in the Holy Mass at the Duomo on the occasion of the Solemnity of Saint Januarius.

NAPLES AND CAMPANIA: CELEBRATIONS IN HONOR OF SAINT ANNA

Savignano Irpino, July 26th, 2019 – A group of Knights and Dames of the delegation of Naples and Campania attended the solemn celebrations, deeply felt by the Knights themselves and by the many faithful who came, in honor of Saint Anna, the Patron of Savignano Irpino. The religious function, followed by a procession through the streets of the city, was celebrated by H.E. Mons. Sergio Melillo, bishop of the diocese of Ariano Irpino – Lacedonia.