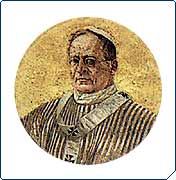 In 1922 Pope Pius XI (left) began his pontificate and priority was given above all else to the delicate negotiations between Italy and the Holy See concerning the establishment of what became the sovereign Vatican City State. (Since the forced annexation of the Papal States in 1870 to the Kingdom of Italy, the Pope was a virtual prisoner within the walls of the Vatican).

Under pressure and protest from Mussolini, the Papal appointment of a Cardinal Protector was temporarily suspended following the death in 1924 of Cardinal Ranuzzi de Bianchi.

The Constantinian Order’s standing in canon law remained unchanged, as was the Order’s appellation ‘Sacred’ – a status that was only granted to Orders under the direct or protection of the Apostolic See.