60th ANNIVERSARY OF THE ORDAINMENT OF HIS EMINENCE THE GRAND PRIOR 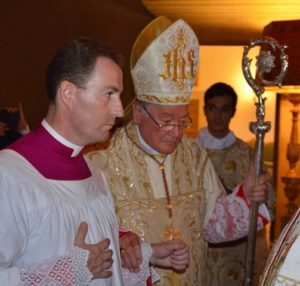 Rome, 20 June 2017 – His Most Reverend Eminence Cardinal Renato Raffaele Martino, our Grand Prior, commemorated the sixtieth anniversary of his ordainment by  celebrating Holy Mass in the  Almo Collegio Capranica, the college where he was first a student and later its President.

H.R.H. Prince Charles of Bourbon Two Sicilies, Duke of Castro and Grand Master, conveyed his sincere best wishes also on behalf of all the knights and dames of the Constantinian Order, for reaching this significant milestone.