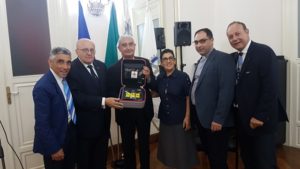 On August 1st the inauguration of the “Let’s help Madagascar” campaign took place. It was organized by the local Rotary Club and was attended by a group of Sicilian Knights.

Mr. Alfonso Lo Zito described the severe problems caused by the lack of healthcare and the initiatives the delegation intends to pursue to improve the social and health assistance on the island and in particular presented the “Madagascar” Project, which focuses on diagnosis, treatment and prevention of diseases.

After the President of the Rotary Club’s speech and Father Giuseppe Calandra’s, the Vice Delegate Mr. Di Janni took the floor and also delivered a semiautoamatic defibrillator donated by the Delegation, under the patronage of the Grand Master.