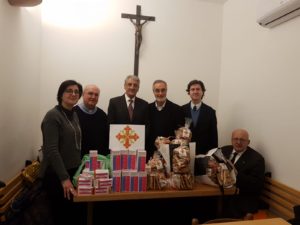 Monreale, February 21st, 2019– The delegation of Sicily and the delegation of Tuscany, represented respectively by the vice delegate Antonio Di Janni and the vice delegate Edoardo Puccetti, together with the vice prior of Tuscany Father Rodolfo Rossi, as part of the project “Briciole di Salute”, donated to Father Francesco, head of the non-profit organization Casa del Sorriso, medicines and basic foods. This donation marks the beginning of a joint collaboration between the two delegations, which will continue in the future with new initiatives.