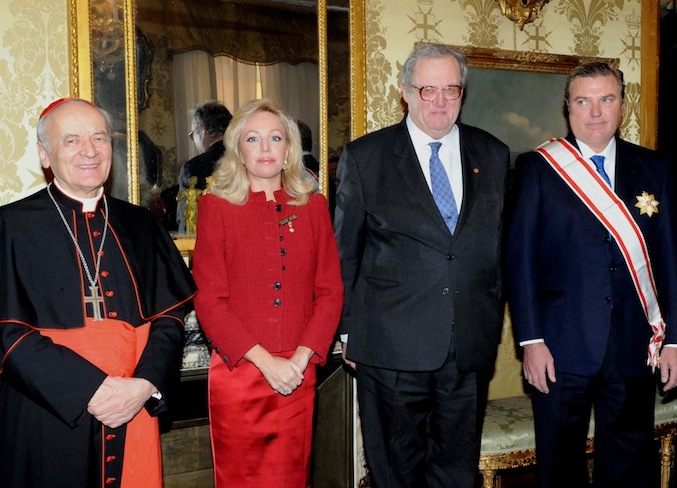 Constantinian Order Grand Master honoured by the Order of Malta Rome – December 2013. HRH Prince Charles of Bourbon Two Sicilies, Duke of Castro and Grand Master of the Sacred Military Constantinian Order of St George was further honoured by the Sovereign Military Order of Malta at a ceremony hosted by the Prince and Grand Master of the Order of Malta, HMEH Frà Matthew Festing at the Magistral Palace in Rome. HRH Princess Camilla of Bourbon Two Sicilies, Duchess of Castro and His Eminence Paolo Cardinal Sardi, Cardinal Patronus of the Order of Malta were also present§ during the occasion.

The Duke of Castro, a Bailiff Grand Cross of Honour and Devotion since 2003 and a member of the Order of Malta since 1983, was invested by Grand Master Frà Festing with the insignia of a Grand Cross Special Class of the Order pro Merito Melitensi.

In his address Frà Festing said “The ceremony of today is the latest token of the warm and cordial ties which have existed for centuries between the Royal House of Bourbon Two Sicilies and the Sovereign Military Order of Malta….The Affinity between your family and our Order is also reflected in the friendly ties between the Sacred Military Constantinian Order of St George and the Order of Malta. This is the result of our shared ideals which are aimed at providing assistance to the sick and the poor as an expression of our Faith and by alleviating the suffering of the victims of violence and natural disasters”. In his speech the Duke of Castro thanked the Prince and Grand Master for this further recognition and remarked, “Our warm friendship, on a personal and institutional level, is one which I greatly value. The many centuries of cordial and brotherly relations between our two Orders are well known and appreciated…. And the fact that our respective Orders share members of both sides is also indicative of our shared commitment to serving the Universal Catholic Church, both on the national and international level”.

Following the ceremony, an official lunch was held in honour of the Duke and Duchess of Castro hosted by HMEH Frà Matthew Festing. Among those attending were HE the Venerable Bailiff Fra’ Carlo d’Ippolito di Sant’Ippolito, Grand Commander, HE Jean-Pierre Mazery, Grand Chancellor, HE Albrecht Freiherr von Boeselager, Grand Hospitalier, HE Marchese Gian Luca Chiavari, Receiver of the Common Treasure, and other members of the Sovereign Council of the Order of Malta including HE Frà John Dunlap, HE Frà Duncan Gallie, HE Frà Emmanuel Rousseau and HE Gian Luigi Magliocco di Brugneto. The Grand Magistry of the Constantinian Order was represented by HE Ambassador Nobile Guiseppe Balboni Acqua, Secretary General, HE Prince Don Sforza Ruspoli, Prince of Cerveteri, Delegate of Rome and Lazio and HE Mr Anthony Bailey, Grand Magistral Delegate for Inter-Religious Relations and Delegate for Great Britain and Ireland.

For more information on the Sovereign Military Order of Malta please visit www.orderofmalta.int