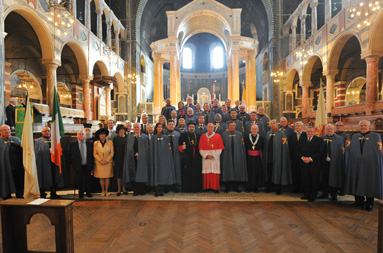 London, October 2011. A Royal Investiture and Mass held at Westminster Cathedral with The Grand Master of the Constantinian Order of St George, HRH Prince Carlo of Bourbon Two Sicilies, Duke of Castro, presiding over a Royal Investiture of news knights, dames and medalists of the British and Irish Delegation of the Constantinian Order of Saint George and the Royal Order of Francis I.

Before the investiture ceremony commenced, Holy Mass was celebrated in Latin by the Grand Prior of the Constantinian Order, His Eminence Renato Raffaele, Cardinal Martino, President Emeritus of the Pontifical Councils of Justice and Peace and for the Pastoral Care of Migrants and Itinerants. The Delegation Sub-Prior, His Grace The Most Reverend George Stack, Archbishop of Cardiff con-celebrated with the Cardinal.

Knights and Dames of the Order entered in formal procession headed the Grand Master and his wife, HRH Princess Camilla, Duchess of Castro, who were followed by the Delegate for Great Britain and Ireland, HE Mr Anthony Bailey and the Vice-Delegate for Ireland, Professor Richard Conroy.

Tags: News
Tweet
Previous articleInstitution of the Delegation for Brescia and consignment of the Constantinian Labarum
Next article Gala Dinner at the Campus Bio Medico in Rome