EMILIA-ROMAGNA: THE POLICE COMMISSIONER OF PIACENZA WAS GIVEN HIS DIPLOMA 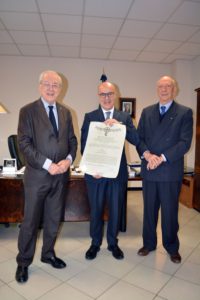 Piacenza, November 16th 2018– During a private ceremony held at the Police Headquarters, Dr. Pietro Ostuni, police commissioner of the city, received the Diploma of Commander of Merit by the Delegate Mr. Corrado Sforza Fogliani and the Vice Delegate, Mr. Franco Marenghi. On the occasion, Mr. Ostuni also was given the Constantinian Chronicles and another book about the Royal Oratory of San Dalmazio of Piacenza.