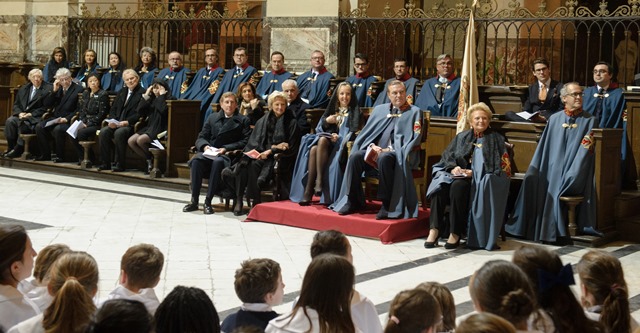 The first investiture ceremony of the new French delegation’s Knights and Dames of the Order took place on Friday, January 19th 2018. It was preceded by a spiritual afternoon contemplation in order to spiritually prepare the aspiring Knights. 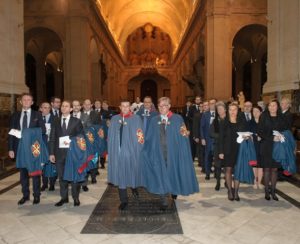 The renewed French Delegation is formally recognised by French Authorities as Association (1901 law), whose name is National Association of French Constantinian Knights and Dames. The delegation is directed by the Counsellor, Mr. Camille Pascal.

The liturgy took place in the prestigious Saint- Roch Church, in Rue Saint- Honoré in Paris, which is one of the most important churches in the city, whose first stone was dropped off in 1653 by the young Louis XIV at the presence of his mother, Queen Anne D’Autriche. The delegation was hosted by the Abbot Thierry Laurent, who is the vicar of this church.

H.R.H. Princess Camilla of Bourbon Two Sicilies, Duchess of Castro, H.R.H. Princess Anna of Bourbon Two Sicilies, H.R.S. Prince Charles- Henri de Lobkowicz, member of the Royal Deputation, H.E. Ambassador of Monaco in Paris, Mr. Claude Cottalorda, the Mayor of the 8th district of Paris, Mrs. Jeanne d’Hauteserre, the Baroness Mrs. Puya Hottinguer and Mons. Arnaldo Morandi, General Secretary of the Grand Prior Office participated in this touching ceremony. During the ceremony Mons. Morandi communicated to the French Knights and Dames the message of plenary indulgency given by the Holy Father Francis to Constantinian Order of Saint George’s Knights and Dames.

An important French assembly participated in the liturgy. Then it was followed by a fraternal and convivial meeting at Hotel Saint-James & Alban, in rue de Rivoli, which allowed the presentation of the next charity initiatives of the delegation.