RELIGIOUS CEREMONY IN HONOR OF CRISTINA OF SAVOY, THE BLESSED QUEEN OF NAPLES AND THE TWO SICILIES 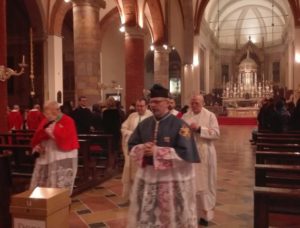 Friday, 27 January 2017 – At the invitation of the Delegate and Prior of the Dynastic Orders of the House of Savoy, Don Maurizio Ceriani, the Delegation for Milano and Lombardy attended Holy Mass in honor of the Blessed Cristina of Savoy who married Ferdinand II of the Two Sicilies in 1832, becoming the queen consort of the Kingdom of the Two Sicilies.
Representing the Constantinian Order at the ceremony were: H.E. Nobile Dott. Alberto Lembo, Grand Inquisitor, Vicar Delegate Nob. Dott. Giuseppe Rizzani and Ecclesiastical Knight of Grace Don Simone Rolandi, representing the Prior, in addition to many faithful and devoted Constantinian and Mauritian Knights and Dames. 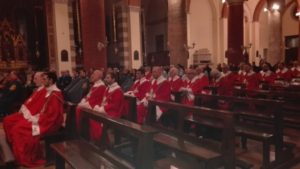