LOMBARDY: EXALTATION OF THE CROSS 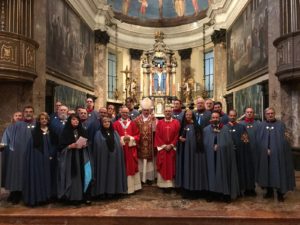 Milan, September 14th 2018. His Eminence Msgr. Francesco Brugnaro, Archbishop of Camerino-San Severino, before the celebration, during a private ceremony, received his diploma as Knight Grand Cross of Ecclesiastical Grace by the Vice Delegate, Mr. Giuseppe Rizzani, in the presence of Mr. Gabriele Albertini, new representative for Milan and Msgr. Arnaldo Morandi, General Secretary of the office of the Grand Prior. Then the Archbishop presided over the Eucharistic celebration that was concelebrated by Msgr. Arnaldo Morandi, Father Luca Camisana and Msgr. Brugnaro. After the ceremony, a dinner was held at the Sant’Eustorgio restaurant where several charitable initiatives were promoted. 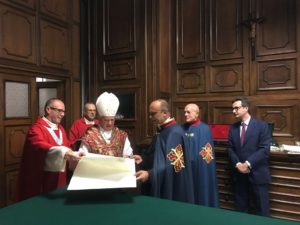