MARCHES AND UMBRIA: MEETING IN LORETO 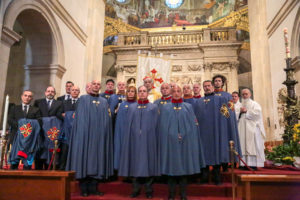 Some Knights and Dames of the delegation of S. Marino and Marches/Umbria met in Loreto on April, 21st.
They attended the Holy mass presided by His Eminence Cardinal Menichelli. Aftewards the delegation met the Delegate, Mr. Claudio Marciano di Scala, Patrizio di Scala. H.E. Cardinal Menichelli underlined the importance to live according to the Order’s values and principles. New Knights were given their diplomas after His Eminence’s blessing.