MEETING WITH THE ITALIAN DELEGATES AND VICE DELEGATES 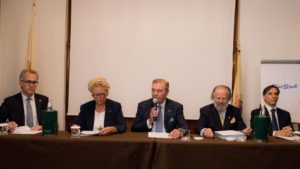 On April, 13rd 2018 a meeting took place between HRH the Grand Master, the Grand Charges, the Italian Delegates and Vice Delegates of the Order.
During the meeting an increasing synergy has been launched.
HRH Prince Charles of Bourbon Two Sicilies, Duke of Castro, was the first who spoke and anticipated some important news of the Order.
HRH implemented some major changes in the Royal Deputation’s structure and new statutes’ publication. These statutes will have huge changes but will respect the tradition.
First of all, HRH the Duke of Castro communicated the eradication of the Charge of Grand Inquisitor. This decision was taken in agreement with H.E. Alberto Lembo.
HRH Princess Beatrice of Bourbon Two Sicilies, Grand Prefect, greeted the participants. Afterwards H.E. Ambassador Antonio Benedetto Spada, Counsellor for the Dynastic Orders of the Royal House, took the floor and described the statutes’ changes of the Order and Francis I Real Order.
These statutes will be published the next weeks on this website and will be fully described in the second edition of the book “Ordini Cavallereschi della Real Casa di Borbone delle Due Sicilie” by H.E. Spada.
Then H.E. the Grand Chancellor talked about the importance of feeling a spirit of belonging to the Order, which will be considered as a priority in organizing the delegations’ activities.
On behalf of H.E. Grand Treasurer, Dr. Viola Cortes took the floor describing the benefits of the new Constantinian Order Charity Onlus and the economic subjects. He also described the crowdfunding platform that will be on the website and will allow a better support for our projects. For this reason this platform will be launched the next days. It will allow people to support economically our project Briciole di Salute and the others related to Salvamamme and Bambin Gesù Foundation.
Then Msgr. Morandi, Secretary of the Grand Prior office, took the floor. On behalf of His Eminence the Grand Prior, he gave some suggestions to Delegates regarding future spiritual meetings and pilgrimages. 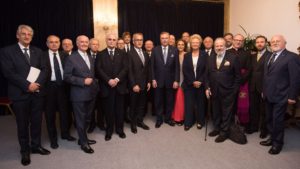