NAPLES – CONFERENCE IN MEMORY OF THE VENERABLE SIXTUS RIARIO SFORZA 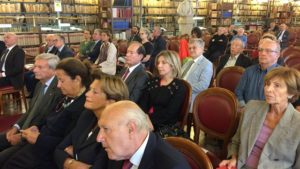 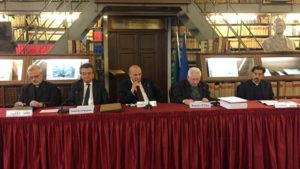 Naples, 29 September 2017 – A new Neapolitan saint? The matter was discussed on September 29 in Naples in the course of a conference organized to celebrate the 140th anniversary of the death of the Venerable Cardinal Sixtus Riario Sforza. The meeting was held in the hall of the Library of Castel Capuano, in the presence of the Bishop of Aversa, Angelo Spinillo.

The conference, organized by the Institute of Historical Research of the Two Sicilies, sponsored by the Royal House of Bourbon Two Sicilies and by the Constantinian Order, discussed and considered an illustrious Neapolitan, Cardinal Sixtus Riario Sforza who was Archbishop of Naples from 1846 to 1877, a thirty year period of great prestige for Naples and the Neapolitan Church.
Member of a noble family, son of Duke Giovanni and Maria Gaetana Cattaneo di San Nicandro, Sixtus Riario Sforza was born on December 5, 1810, the same year as Ferdinand II
As a result of sensitive diplomatic missions carried out on behalf of Pope Gregory XVI, he was consecrated Bishop of Aversa at the youthful age of 34, becoming Archbishop of Naples just six months later. He was also very close to Pope Pius IX during the latter’s exile to Naples and became one of his closest collaborators. He was also very active in promoting new parishes and new institutions to provide material and spiritual aid to the needy and the ill, including in their own homes, anticipating the future and often intervening not only personally but also by using his own inheritance.
In January 1846 he was nominated Cardinal by Pope Gregory XVI.
His activities were so invaluable during the cholera epidemic of 1854 that Ferdinand II rewarded him with the highest honor of the Kingdom of Naples, the Royal Order of San Gennaro, and, on an international level, the Grand Master of the Order of Malta conferred upon him the title of Bailiff Knight Grand Cross.
He did not accept the end of the kingdom of Naples and its annexation to the Kingdom of Italy and refused to receive Giuseppe Garibaldi, in his heart always remaining faithful to the Bourbon kingdom. For this reason in 1860 he was exiled for several years, remaining in Rome and Terracina until his return to Naples in 1866. In November 1869 he refused to bless the Prince of Naples (the future Victor Emanuel III) nor to attend the Te Deum in the Basilica of San Lorenzo Maggiore. His sanctity was well known even while still alive to the point that the Neapolitan Curia rewarded him with the gift of a precious stole that had belonged to San Carlo Borromeo to whom he was greatly devoted.
Recently, in light of his numerous activities, in January 2012 Pope Benedict XVI granted him the title “venerable”. He died on September 29, 1877, from an illness. Upon his election as Pope, Leo XIII publicly stated that if Cardinal Riario were still alive he certainly would have been elected Pope in his stead.