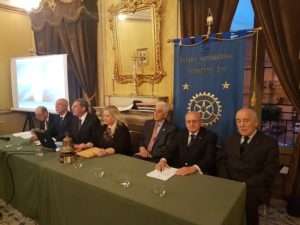 A conference on Chivalrous Orders was held in Palazzo Fatta in Palermo, organized jointly by the Rotary Club of Palermo South and the Rotary Club of Palermo Monreale. Present for the conference were the delegate of the Order of Malta for Sicily West, Baron Vincenzo Calefati, the Chancellor of the Lieutenancy of the Holy Sepulcher, Domenico Pantaleone and the Vice Delegate of the Constantinian order.

Following remarks on the Equestrian Order of the Holy Sepulcher and the Order of Malta, Dott. Janni spoke of the origins of the Constantinian Order up to its current regency held by H.R.H. Prince Charles of Bourbon Two Sicilies, Duke of Castro and Head of the Royal House. He then described the many humanitarian activities carried out by the Constantinian Order in Sicily and  in other parts of the world, citing among others the Constantinian Hospital in Uganda and the aid provided to the mission of the Archdiocese of Monreale in Tanzania. Regarding the delegation’s work in Sicily he spoke of the ambitious project Crumbs of Health intended to assist the children of needy families in Sicily  by providing products for children aged 0 to three years.

The project was established in 2014 in Monreale under the leadership of the Prior of Sicily, H.E. the Most Reverend Mons. Michele Pennisi, Archbishop of Monreale, and was later extended to also include the Dioceses of Piazza Armerina, Piana degli Albanese, Acireale, Patti, Messina, Palermo, Trapani, Mazara del Vallo and Catania.

Finally, the Vice Delegate spoke of the recognition of the Sacred Military Constantinian Order of St. George by Italy, France and Hungary and the granting of a special plenary indulgence by Pope Francis last May. He also pointed out that the current Grand Prior holds his post thanks to the direct support of the  Secretariat of State of His Holiness.

Tweet
Previous articleSTREET NAMED AFTER THE BLESSED MARIA CRISTINA, QUEEN OF THE TWO SICILIES, IN BARRAFRANCA AND CONSTANTINIAN GOLD MEDAL TO THE LABARUM OF THE CITY
Next article BENEFIT MEAL FOR THE CHILDREN OF THE SANITA DISTRICT