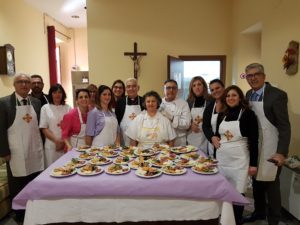 On  December 21st,  the Sicilian delegation offered a Christmas lunch to the guests of the “Benedetto Balsamo” retirement home in Monreale. The Archbishop of Monreale HE Msgr. Michele Pennisi, Prior of Sicily, the Vice Delegate, Mr. Vincenzo Nuccio and the volunteers Daniela Prestigiacomo, Sonia Lo Monaco and Antonella Zito, the director Giovanni Viola and the assistants of the structure served the meals to the elderly guests. 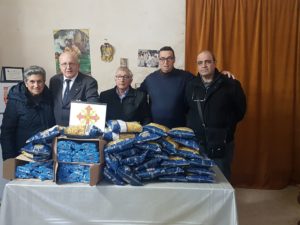 On December 23rd , the Vice Delegate handed over about 100 kilos of pasta to the director of the Maria SS Assunta fraternity located at the Real Carolina Church, in a suburb of Palermo called Guadagna. The confreres will distribute the pasta to the needy people of the neighborhood. 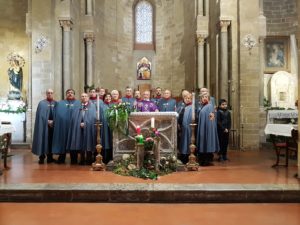 On December 23rd, Msgr. Salvatore Grimaldi, parish priest of the Magione Church, celebrated a holy mass for the knights and the dames on the occasion of Christmas. Before the Eucharistic celebration, Bishop Grimaldi thanked the Royal Family and the Sicilian delegation for donating four of the new stands for the church. 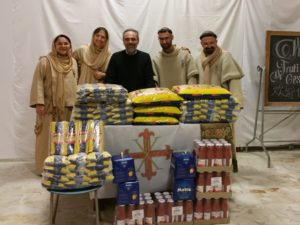 On December 23rd , Mr. Marcello Cantone, representative of Noto, delivered lots of products to Father Volantino, responsible of Saint Corrado canteen. After the donation, Mr. Cantone was received by Mgr. Staglianò and discussed about the activities of the delegation in his diocese. 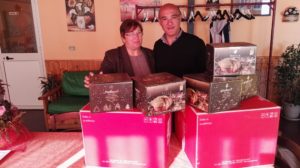 On December 23rd, some Sicilian knights offered panettone, a typical Italian Christmas cake, to young mothers, their children and families in need at the Madonna della Tenda di Cristo community in Acireale. The cake had been provided by a local industry. The delivery is part of the project “Briciole di Salute” and was carried out under the patronage of the Bishop of Acireale H.E. Msgr. Antonino Raspanti, IEC Vice President for Southern Italy, and thanks to the active collaboration of the meritorious Giuseppe D’Urso. 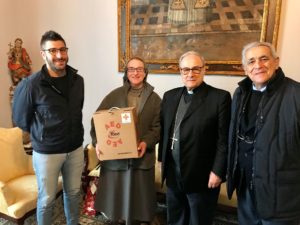 On  Christmas Eve,  Mr. Michele Salerno and Mr. Antonino Centonze were received by H.E. Msgr. Domenico Mogavero, Bishop of Mazara, to wish him a merry Christmas. During the meeting, they were able to appreciate the message His Eminence Cardinal Renato Raffaele Martino, Grand Prior, had addressed to all the knights for Christmas. Then, a new defibrillator was offered to the Bishop who, visibly moved, gave it to the Mother Superior in the presence of the sports directors. 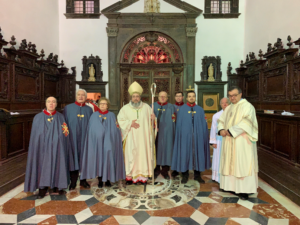 On December 30th , a Mass was celebrated and presided over by the Reverend Father Vittorio Rizzone at the Benedictine Abbey of S. Martino delle Scale. Many knights attended. Before the blessing, the Vice Delegate gave the Abbot his letter of appointment as Commander of Grace. After the religious ceremony, the Sicilian delegation offered a Christmas lunch to one hundred disadvantaged families.