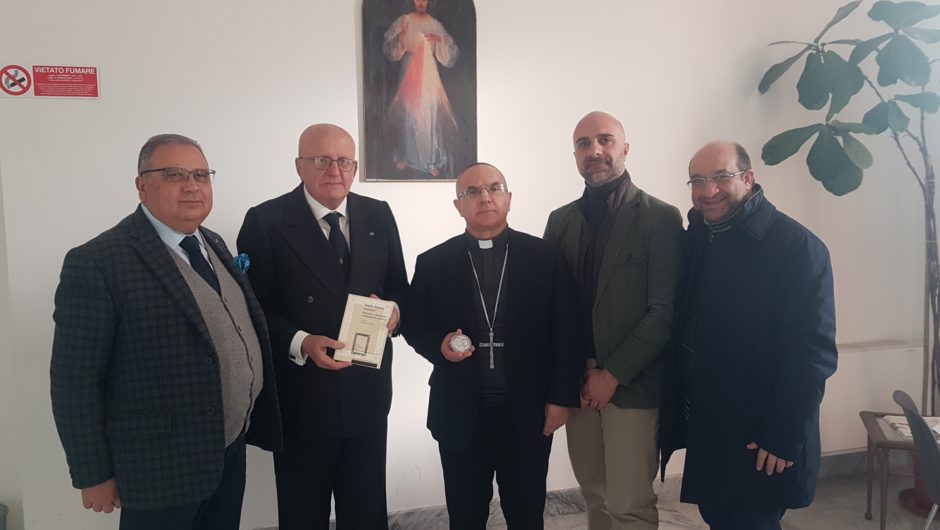 SICILY: ACTIVITIES OF THE MONTH OF FEBRUARY

On February 28th 2020 a conference was held in the conference room of the Riviera hotel in Pergusa. It was about the myth of Colapesce and the titans. Dr Macaluso, who is a member of the Order, had carried out his first conference in 2001 when HRH Prince Charles of Bourbon Two Sicilies had placed a plaque on the island’s volcano bearing a writing: THIS ISLAND IS AND WILL ALWAYS BELONG TO THE SICILIAN PEOPLE. After a few months, the plaque was destroyed. The plaque was replaced in 2010 in the presence of HRH Princess Beatrice of Bourbon Two Sicilies.

On February 28th the vice delegate, accompanied by Mr. Matteo Bertino, representative of the city of Enna, Mr. Alessandro Balsamo and the Constantinian chaplain Father Dario Pavone, were received by H.E. Msgr Rosario Gisana, bishop of Piazza Armerina. The meeting allowed for a discussion on the delegation’s current and future activities.

On February 26th a representation of the delegation attended the Ash Mass at the Church of San Francesco di Paola in Catania.

On February 22nd a distribution of products took place in Carini. The vice delegate, accompanied by Mr. Giulio Pillitteri, delivered to the Archpriest of Carini, Father Giacomo Sgroi, homogenized, baby pasta and diapers of different sizes.

The monthly delivery of products of the project Briciole di Salute, supported by the delegations of Sicily and of Tuscany, took place on February 21st at the Casa del Sorriso in Monreale.

On February 20th the Vice Delegate, accompanied by Mr. Michele Salerno and Mr. Baldassare Cacioppo, delivered food to H.E. Mgr. Domenico Mogavero, Bishop of the Diocese of Mazara del Vallo. The bishop received the delegation at the episcopal palace where they were able to discuss the collaboration that links the diocese of Mazara with the delegation itself.

On February 18th, Archbishop Salvatore Grimaldi celebrated a mass on the occasion of his 43rd anniversary as a priest at the Constantinian Basilica La Magione. After the religious ceremony, a reception was held at the parish hall.

On February 19th, H.E. Most Rev. Antonio Staglianò, bishop of the Diocese of Noto, celebrated a solemn pontifical at the cathedral on the occasion of the feast of the Patron of Noto.