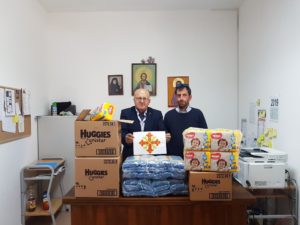 On March 21st, the Vice delegate of Sicily handed over to the Caritas volunteers of the Piana degli Albanesi Eparchy several diapers of various sizes and pasta for children from zero to three years old. The Caritas is headed by Dr Caruso. The Vice delegate was also received by H.E. Rev. Msgr. Giorgio Demetrio Gallaro. During the meeting, they talked about the importance of the project Briciole di Salute that has been active in the Eparchy for several years. 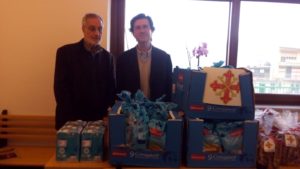 On March 21st Francesco Grandinetti and Marilena Grandinetti gave Father Francesco, head of the Casa del Sorriso in Monreale, 270 croissants, milk and approximately 15 kg of biscuits from the bakery of Mrs. Enza Pizzolato. 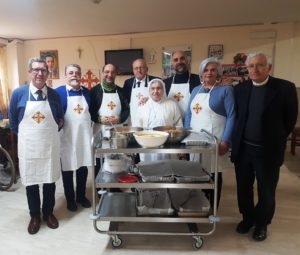 According to the annual tradition, a solidarity lunch was held, offered by the Sicilian delegation, at the Boccone del Povero in Piazza Armerina. The vice delegate, together with Matteo Bertino, representative of the province of Enna, Alessandro Balsamo, Giovanni Paternò, Giuseppe Balsamo, Giuseppina Crescimanna and Father Dario Pavone served the meals to the guests of the structure. 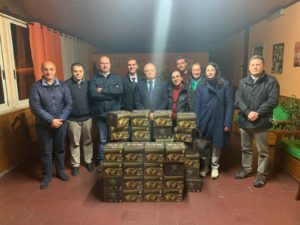 On Friday, March 22nd, some Knights were in charge of delivering the confectionery products of a local businessman to the Madonna della Tenda di Cristo Community in Acireale. The monthly delivery, which is part of the “Briciole di Salute” project, was possible thanks to the active collaboration provided by Mr. Giuseppe D’Urso. 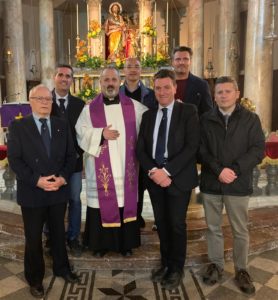 On Friday, March 22nd, Antonino Amato, Cristofaro Arena, Giancarlo Greco, Massimo Putrino, Giuseppe Longo, together with Mr. Massimo Vacanti, participated in the spiritual exercises at the Church of Saint Joseph. Lots of local people participated in the meeting, which was an occasion for deep reflections and meditation.