A liturgy for the Holy Trinity was celebrated in Palermo at S. Martino delle Scale Abbey. Lots of Sicilian Knights attended and were guided by HRH Princess Beatrice of Bourbon Two Sicilies, Grand Prefect.

Before the beginning of the celebration, the Abbot Father Rizzone allowed the delegation to visit the abbey and then received his designation as Commander of Ecclesiastical Grace by the Grand Prefect.

The Vice Delegate, Dr. Di Janni, gave some packages of food to the Abbot and the Manager of the caritas in the Abbey. “Briciole di Salute” was then inaugurated at the Abbey where more donations will take place monthly and will help the needy families. 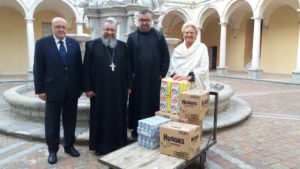