SICILY DELEGATION . ACTIVITIES IN THE MONTH OF MAY 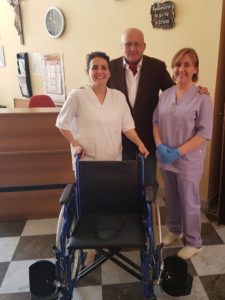 The Sicily Delegation carried out numerous activities during the month of May.

On Sunday, May 7, a mass was celebrated  in the church of St. Basilio in Palermo to commemorate the hundredth anniversary of the apparition of the Madonna of Fatima to the three young shepherds. The mass was also dedicated to the memory of victims of all wars, terrorist acts and the mafia. The Constantinian delegation was led by the Vice Delegate.

On the following day they donated a wheelchair for the elderly hospitalized in the Balsamo Hospice of the Archdiocese of Monreale. The  Delegation has developed a very rewarding relationship with the hospice and the knights and dames often visit the  facility to bring comfort to the residents.

The project Crumbs of Health, a unique undertaking of the Sicily delegation, provided food for children ages 0 to three years who live in the town of Borgetto, province of Palermo, archdiocese of Monreale. This was made possible thanks to volunteers of the Sicilian non-profit organization Constantinian Cross. The items were delivered to Don Sergio Albano, priest of the church of St. Anthony. Many of the products were collected in a supermarket of the area by Constantinian volunteers. The project Crumbs of Health reaches out to various cities in Sicily and is a highly prized endeavor of the Sicilian delegation.

On the 11th the Vice Delegate brought to the head of the Caritas organization in the Diocese of Piana degli Albanesi, Papas Alberto Stassi, products and equipment for children aged 0 to 3 years from the needy families of the Diocese.

Two additional donations of food items were also brought to the soup kitchen of the church of St. Mamiliano. The Sicilian delegation donated more than 20 kg of fish for each delivery and was warmly thanked by the volunteers of the center for their valuable and continuous support.

Tweet
Previous articleTUSCANY – DONATION OF FOOD AND CLOTHING
Next article STREET NAMED AFTER THE BLESSED MARIA CRISTINA, QUEEN OF THE TWO SICILIES, IN BARRAFRANCA AND CONSTANTINIAN GOLD MEDAL TO THE LABARUM OF THE CITY