SICILY: HRH PRINCESS BEATRICE OF BOURBON TWO SICILIES WAS GIVEN THE GRAND CROSS OF MERIT OF THE ORDER OF MALTA

HRH Princess Beatrice of Bourbon Two Sicilies, Grand Prefect, was given the Grand Cross of Merit of the Sovereign Order of Malta by Father Naselli, Grand Prior of the Sovereign Order of Malta, for her efforts in the realization and maintenance of the project “Briciole di Salute”. The event, whose godmother was Princess Beatrice, was held on January 14th  at the Archaeological Museum Salinas in Palermo, on the occasion of the conference titled “Palermo, Capital of the Kingdom, the Bourbons and Archeology in Palermo, Naples and Pompei”. The event was organized by the Sicilian delegation in collaboration with the Museum. Baron Vincenzo Calefati of Canalotti, delegate of the Order of Malta for Western Sicily and the Consul of Morocco attended as well. 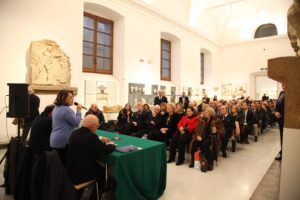 Tweet
Previous articleTUSCANY: BRICIOLE DI SALUTE IN VIAREGGIO
Next article SICILY: A DEFIBRILLATOR AND MEDICATIONS WERE DELIVERED TO THE MISSION IN TANZANIA