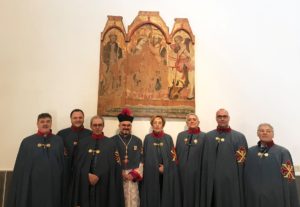 On Sunday 22 April the eucharistic celebration in honor of Saint George, patron of the Sacred Military Constatinian Order of Saint George was celebrated at the church “Maria SS.ma Annunziata” of Castelvetrano.
In the Church there is an ancient and artistic triptych of 1448 which represents the ancient iconography of Saint George. Lots of Knights of the province of Trapani attended. The mass was celebrated by Father Rino Randazzo, who also thanked the Order for its charitable activities, in particular for those related to “Briciole di Salute”. 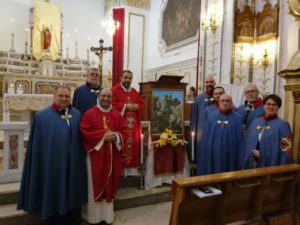 The same day a mass was celebrated  for Saint George at the Church of S. Stefano (Piazza Armerina). It was presided by His Eminence Nino Rivoli. Some knights of the province of Enna and Caltanissetta took part in the ceremony. 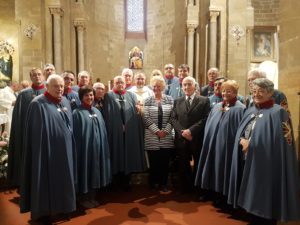 A mass for Saint George, Protector of the Sacred Military Constatinian Order Of Saint George, was celebrated in Palermo. HRH Princess Beatrice of Bourbon Two Sicilies, Grand Prefect was present. The liturgy was celebrated by HE Salvatore Grimaldi in the presence of a lot of Sicilian Knights.