Padova, Saturday, September 17, 2016 – On Saturday, September 17 the 4th Training Conference for Knights, Dames and Inductees of the Triveneto Delegation was held during the solemn celebration of Exaltation of the Holy Cross. The conference was held in the Theological Seminary of the Patron Saint of Padova.
The session was followed by a procession through the “Holy Door of Mercy” accessing the adjacent Pontifical Basilica of Saint Anthony where mass was concelebrated by Mons. Pier Emilio Salvadè and Father Giorgio, Vice Rector of the Basilica of the Saint Anthony. The rite of investiture was presided by H.E. the Most Reverend Eminence Dino De Antoni, Archbishop Emeritus of Gorizia, who was presented with the Diploma and insignias of Ecclesiastical Knight Grand Cross of Grace.
On the same date Father Giorgio received the Ecclesiastical Knight of Grace Commemorative Diploma conferred to Father Enzo Paolo Poiana, former Rector of the Pontifical Basilica of Saint Anthony of Padova.

END_OF_DOCUMENT_TOKEN_TO_BE_REPLACED

SOLEMNITIES OF THE EXALTATION OF THE HOLY CROSS 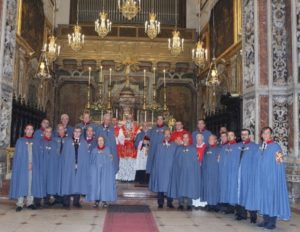 From its remotest origins the Sacred Military Constantinian Order of Saint George has been dedicated to glorification of the Cross, propagation of the Faith and defense of the Holy Roman Church.

It is therefore the duty of the Knights and Dames to live as perfect Christians and to take part in all those initiatives to nurture and foster the principles of the Order. The Solemn Eucharistic Celebration of the Exaltation of the Holy Cross was presided by Constantinian chaplain Father Saverio Cento, priest of the parish church of Saint Francis di Paola of Palermo.

The mass was concelebrated by fathers Antonio Porretta and father Giorgio Terrasi.