THE CONSTANTINIAN ORDER IN PIACENZA 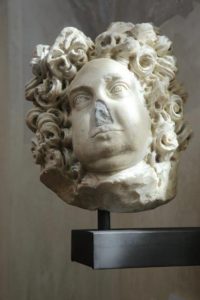 On March 11 Piacenza became the theatre for a particularly significant event organized by the Delegation of Emilia Romagna. The event consisted of several phases that began with the celebration of Holy Mass in the Royal Oratory of San Dalmazio.
The mass, celebrated by H.E. Mons. Gianni Ambrosio (Bishop of the Diocese of Piacenza-Bobbio) was concelebrated by Mons. Arnaldo Morandi (Secretary General of the Office of the Grand Prior and Prior of the Lombardy Delegation), Mons. Domenico Ponzini (Prior of the Delegation), Don Stefano Antonelli (Vice Prior of the Delegation), Don Manuel Paganuzzi (Chaplain of the Military Academy of Modena and the Modena Association) and Don Bruno Crotti (military chaplain of Piacenza). Prior to the mass Mons. Morandi read a message from His Eminence the Most Rev. Cardinal Renato Raffaele Martino, Protodeacon of the Holy Roman Catholic Church and Grand Prior of the Order, conveying his greetings to the Bishop, the Senior Authorities and Dignitaries and all present and offering words of encouragement “for a path of faith founded on Catechesis, Liturgy and Charity”, applauding the initiative that “affirms the spiritual foundation of the sacred Constantinian militia” and “recalling the ceremony of investiture” which he officiated in Saint Dalmazio in December 2015, “followed by a visit to the elderly in the Senior Home of Madonna della Bomba”.
The celebrants were joined by the Prior and members of the very ancient confraternity of the Holy Spirit, owners of the Oratory, in their ceremonial garb. 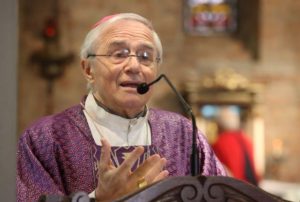 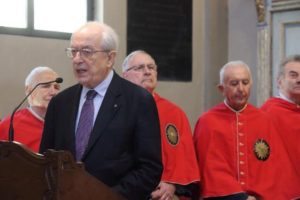 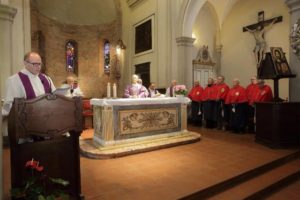 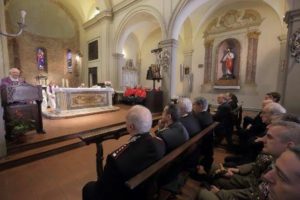 The importance of the event was highlighted by the presence of H.E. Nob. Dott. Alberto Lembo, Grand Inquisitor, H.E. Prince Giancarlo Rocco di Torrepadula, Grand Treasurer, and numerous other civilian and military authorities, including H.E. Prefect Dott.ssa Anna Palombi, Police Commissioner Dott. Salvatore Arena, the Provincial Commander of the Carabinieri Corps, Col. Corrado Scattaretico, Commander of the 2nd Regiment Pontoon Corps, Col. Daniele Bajata, Provincial Commander of the Guardia di Finanza, Col. Daniele Sanapo, Chief of Protocol for the 2nd Regiment of the Pontoon Corps, Col. Massimo Moreni, Commander of the Carabinieri Company, Capt. Stefano Bezzecheri, Commander of the Fire Dept., Ing. Francesco Martino and Commander of the Municipal Police, Dott. Piero Romualdo Vergante.
The Delegation of Emilia Romagna was represented by Delegate Nob. Avv. Corrado Sforza Fogliani, Vice Delegate Avv. Franco Marenchi, the Representative for the city of Bologna (Count Giacomo Cavina Boari), Forli and Cesena (Lieut. General Antonio De Vita) and Modena and Reggio Emilia (Knight of Grand Cross Ilario Pagani), along with numerous Knights.
Also in attendance as guests of the delegation were H.H. Prince Lelio Orisini d’Aragona for Rome and Lazio, Major General Salvatore Camporeale, Commander of the Military Academy, Col. Carlo Cavalli Chief of Staff of the Military Academy and Col. Enrico Barduani, Chief of Public Information for the office of the Defence Chief of Staff.
At the conclusion of the celebration, made more enjoyable by a performance of organ music by Prof.ssa Giuseppina Perotti, accompanied by a violin, Delegate Avv. Sforza Fogliani thanked the Cardinal Grand Prior, the Bishop, the Senior Officers of the Order, Authorities and the public present. He then spoke of the centrality of Piacenza, as confirmed by the preachings of the saint honored in the Oratory, whose importance led the Delegation of Emilia Romagna to produce the celebratory brochure presented on this occasion, accompanied by the emblems of the Constantinian Order and the Royal House of Bourbon Two Sicilies.
The Delegate then spoke of the great value of the Oratory, dating to 1040, and the crypt contained therein dating to the VI-VII century. He explained that, after having been elevated in 1823 to “Ducal Oratory” by Maria Luigia of Austria, in 1850 it was elevated to the rank of “Royal Oratory” by King Charles III of Bourbon. The Delegate then narrated the history of the Order, emphasizing how the descendants of the Imperial House of Comneno, who held the Grand Magistry, came to Italy and how the last member of the Family, Prince Giovanni Andrea Angelo Flavio Comneno, Grand Master of the Constantinian order, chose as his residence the city of Piacenza (as a guest of the Farnese family) and that since he lacked any descendants, in 1697 he decided to transfer the Grand Magistry of the Order to Francis I Farnese, Duke of Parma and Piacenza. Inspired by this significant episode the Delegate wished to draw attention to the absolute centrality of Piacenza in the history of the Order and stated that the marble bust of Comneno underwent an accurate restoration thanks to the Delegation of Emilia Romagna. 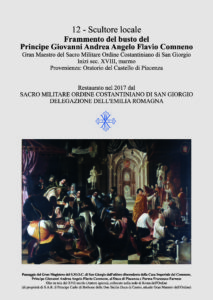 Before concluding the ceremony in San Dalmazio, Archbishop Mario Zumbo, member of the Confraternity, gave a brief account of the historical and artistic aspects of the Oratory.

The illustrious guests were then received in Palazzo Farnese by the Mayor of Piacenza, Dott. Paolo Dosi, and the Curator of the Civic Museums, Dott.ssa Antonella Gigli, to admire the restored bust of Prince Comneno, Grand Master of the Constantinian Order from 1687 to 1697. Following the introduction by Dott.ssa Gigli, the Mayor congratulated the Dignitaries and Knights for this most commendable initiative of the Constantinian Order, an endeavor that paid tribute to the historical and artistic heritage of the city. 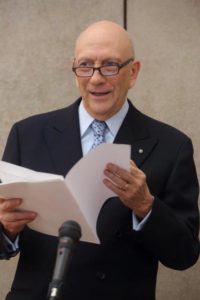 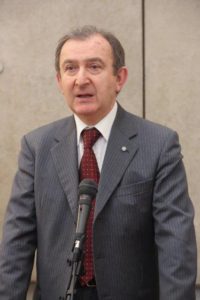 Vice Delegate Avv. Franco Marenghi then took the floor, thanking the Mayor and the Curator of the Museums (acknowledging also her support and enthusiasm for the initiative) and greeting the Dignitaries and Knights. He reviewed the history of the Constantinian Order, especially the era of the Comneno and Farnese families up to transfer of the title of Grand Magistry to the Bourbons Two Sicilies through Elisabetta Farnese, spouse of Phillip V, King of Spain, and mother of Charles, King of Naples and new Grand Master of the Order. The Vice Delegate highlighted  the fact that the Royal Family of the Bourbons Two Sicilies kept alive the memory of its Farnese ancestry, as indicated by the instructions contained in  the will of King Francis II (who died in exile), that the Head of the Family also bear the title of Duke of Castro.

Avv. Marenghi spoke of the crucial role played by Delegate Avv. Sforza Fogliani in retrieving and restoring the bust of Comneno, engaging art historian Prof. Ferdinando Arisi, thanks to whom it was possible to attribute a name to that anonymous bust.

The Vice Delegate, as charged by the Delegate, then read a letter from the Grand Master, H.R.H. Prince Charles of Bourbon Two Sicilies, Duke of Castro, signed “Charles Duke of Castro”. In the message the Grand Master expressed his “deep appreciation for this important initiative that contributes to keeping alive our thousand year history and emphasizes the commitment to intensify the activities of the Order to protect significant works of art”.

Subsequently, the Vice Delegate asked H.E. the Grand Inquisitor to speak of one of the most important, albeit little known, undertakings  of the Constantinian Order during the Farnese era. The event concerned the military expedition of the “Imperial Constantinian Equestrian Regiment of St. George”, that the Duke of Parma and Piacenza, Francis I Farnese, Grand Master of the Order,  sent to Dalmatia in response to an appeal by the Pope, to support the cause of the Venetians against the Turks.  The expedition, lasting approximately two years (from 1717) and consisting of two thousand men, was led by Col. Count Federico Dal Verme, a native of Val Trebbia,  accompanied by a select corps of officers that included the  most illustrious names of the Piacenza aristocracy.
Nob. Dott. Lembo also pointed out that the efforts of Duke Farnese were not without recognition, as both Emperor Charles VI and Pope Clement XI once again confirmed the legitimacy of the Constantinian Order. He considered this event an important step in the overall development of the Order, providing details and recognizing the important role played by the Dynasty within the context of European politics of the 1700s. The Grand Inquisitor then read a message from Ambassador Count Giuseppe Balboni Acqua, Secretary General of the Order, conveying his congratulations for this important initiative.  His comments were followed by those of art conservator Dott.ssa Micaela Bertuzzi who illustrated the various phases of the delicate restoration of the bust of Comneno, which she undertook at the request of the Delegation of Emilia Romagna. The Vice Delegate then complimented her, on behalf of the Delegation, for the excellent results brought about by her professionalism and enthusiasm.

Continuing with its vocation of solidarity so greatly encouraged by the Cardinal Grand Prior, the Delegation of Emilia Romagna continued its support of the Madonna della Bomba Nursing Home, begun on the occasion of the visit  of the Grand Prior in 2015, by organizing a benefit reception in the Circolo dell’Unione, attended by the senior dignitaries of the Order, civilian, military and religious authorities and numerous Knights, together with their spouses and guests.

Tweet
Previous articleVALLE D’AOSTA – FIRST STEPS TAKEN IN THE REGION
Next article THE CONSTANTINIAN ORDER IN PIACENZA SICILY, MARCH 19 2017, CRUMBS OF HEALTH IN BARRAFRANCA AND SOLIDARITY MEAL IN MONREALE AND CATANIA