The journey of solidarity of Prince Charles and Princess Camilla of Bourbon-Two Sicilies to Rome, to sign two memorandums of understanding and future collaboration with the Italian Red Cross 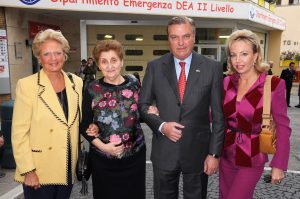 On their return from Palermo, HRH Prince Charles of Bourbon-Two Sicilies, Duke of Castro, Head of the Royal House of Bourbon and Grand Master of the Constantinian Order, and HRH Princess Camilla of Bourbon-Two Sicilies, Duchess of Castro, visited Rome, where they signed two important memorandums of understanding with the Bambin Gesù Children’s Hospital and the Salvamamme Association.
In the afternoon of 12 April, an important meeting was held at the Bambino Gesù Hospital Foundation, at which the Sacred Military Constantinian Order of Saint George committed itself to strongly support the social project for welcoming and taking care of the young patients. Also present at the event was the President of the Rome-based Children’s Hospital and of the Bambino Gesù Foundation Dr. Mariella Enoc, the Fundraising and Social Communications Officer of the Foundation Dr. Cynthia Russo, the Secretary General of the Foundation Prof. Francesco Avallone, and the Director of the Neurosciences and Neuro-rehabilitation Department Prof. Federico Vigevano.
In the morning of 13 April, Their Royal Highnesses Prince Charles and Princess Camilla of Bourbon-Two Sicilies, with the Princesses Maria Carolina and Maria Chiara of Bourbon-Two Sicilies, accompanied by HRH Princess Beatrice of Bourbon-Two Sicilies, were welcomed at the headquarters of the Italian Red Cross.
During the meeting the foundations were laid for a fruitful future collaboration designed to join the efforts of the Italian Red Cross and of the Constantinian Order, in Italy and abroad, in tackling the most important humanitarian challenges. Their Royal Highnesses were awarded the gold Order of Merit Medal in the presence of the President of the Italian Red Cross Association and of the International Federation of Red Cross and Red Crescent Societies Francesco Rocca, Dr. Rosario Valastro and Dr. Gabriele Bellocchi, National Vice-Presidents of the Italian Red Cross Association.
In the morning of 14 April, HRH Princess Camilla of Bourbon-Two Sicilies, Duchess of Castro, was appointed World Ambassador of the Salvamamme Association. The mission of the Association is to help households experiencing economic hardship and women escaping violence. Thanks to the project “Nursery in Rete 2.0 & i bambini crescono” (2.0 Nursery Networking & Growing Children), 100 households will receive a full set of new clothes. The event was attended, at the organisation’s headquarters in Rome, via Bernardino Ramazzini 15, within the headquarters of the Italian Red Cross, by its President Grazia Passeri, and its Honorary President Barbara De Rossi, as well as Debora Diodati, President of the Italian Red Cross for the Metropolitan Area of Rome, Monsignor Augusto Paolo Lojudice, Bishop of the Diocese of Rome South, and her daughters Maria Carolina and Maria Chiara. Prince Charles of Bourbon-Two Sicilies, Grand Master of the Sacred Military Constantinian Order of Saint George, will also be supporting the “Nursery in Rete 2.0 & i bambini crescono” project, as well as another Salvamamme project called “La Valigia di Salvataggio”. 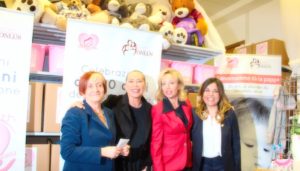 HRH the Duchess of Castro at Salvamamme Association 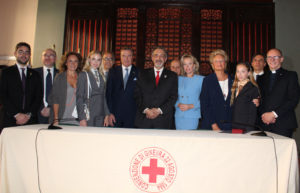