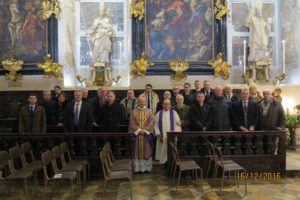 Torino – 16 December 2016 – The Delegation of the Piedmont and Valle d’Aosta Region made a generous donation of food and funds to the Pro Infantia Derelicta, an organization that welcomes and cares for abandoned minors.
The initiative, organized by the Vicar Delegate, Cav. Dott. Rodolfo Baschirotto, was carried out thanks to the generous participation of numerous knights from the Delegations of Torino, Aosta, Alessandria, Asti and Cuneo, all of whom contributed in a spirit of great generosity.
The event was followed by Christmas Mass, concelebrated by Knight of Grace Don Diego Maritano and the former Rector of the Basilica of Saints Maurizio and Lazzaro of Torino, Don Salvatore Ormando and Knight Don Piccoli of Alessandria. Knights and Dames of the Piedmont Delegation and dignitaries of the territory were also present, including Gen. Massimo Biagini, Commander of the Taurinense Brigade and Ing. Giovanni Maria Ferraris, Councilman for the Piedmont Region.