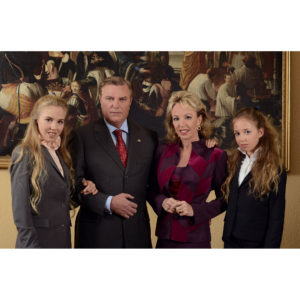 Rome, October 19th 2018 – On the occasion of their twentieth wedding anniversary, TRH Prince Charles and Camilla of Bourbon Two Sicilies, Duke and Duchess of Castro, accompanied by the TRH Princesses Maria Carolina, Duchess of Calabria and Palermo and Maria Chiara, Duchess of Capri and of Noto, will be visiting Naples from November 3rd to November 5th.

The first official appointment is scheduled for Saturday November 3rd at the Teatro Mediterraneo, Mostra d’Oltremare in Naples. TRH will attend a folkloristic cultural show of Neapolitan style entitled “25 YEARS OF THE NEOBORBONICAL MOVEMENT AND TWO SICILIES AWARD ” where the greatest exponents of the Italian Contemporary Theater will attend. At the end of the show, the Dukes of Castro will celebrate their anniversary together with all the guests.

On Sunday, November 4th Their Royal Highnesses will be at the Cardarelli Hospital on the occasion of the inauguration of a space dedicated to welcoming not only the children of the patients, but also those of the hospital staff. The Hospital aims at providing concrete support to its employees so as to facilitate a better balance between work and family life.

During the afternoon, the Dukes of Castro will be visiting the Basilica of San Ferdinando for the inauguration of the nativity scene dedicated to famous men including the statuette of H.M. King Francis II of Bourbon Two Sicilies and afterwards will attend a solemn Mass at the Pontifical Basilica of San Francesco da Paola, organized by the neapolitan delegation of the Sacred Military Constantinian Order of St. George.

Their trip to Naples will end on Monday 5th. After the visit to the historic atelier Marinella, official supplier of the Real House, which on the occasion of their twentieth anniversary will pay homage to the Dukes of Castro of a tie and a scarf made exclusively for celebrating their union, Their Royal Highnesses will also go to the Royal Palace of Caserta where a camelia will be planted in their honor.