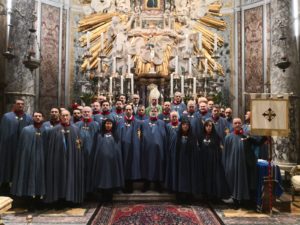 Montenero (Livorno), February 3rd, 2019 – On February 3rd eight new members took part in the investiture ceremony at the Sanctuary of the Vergine delle Grazie in Montenero and became Knights of the delegation. The mass was celebrated by the Prior of the delegation of Tuscany H.E. Bishop Simone Giusti, Bishop of Livorno. H.E. Prince Francesco Ruspoli, Grand Chancellor, Mr. Edoardo Puccetti, Vice Delegate of the Delegation, Mr. Antonio di Janni, Vice Delegate of the Delegation of Sicily, and many Dames and Knights of the Delegation attended. According to the new investiture rite, the ceremony was completely handled by the Vice Prior of Tuscany, Father Rodolfo Rossi. 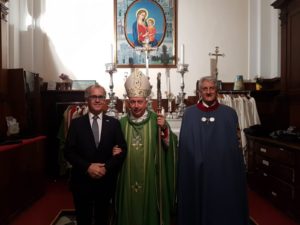