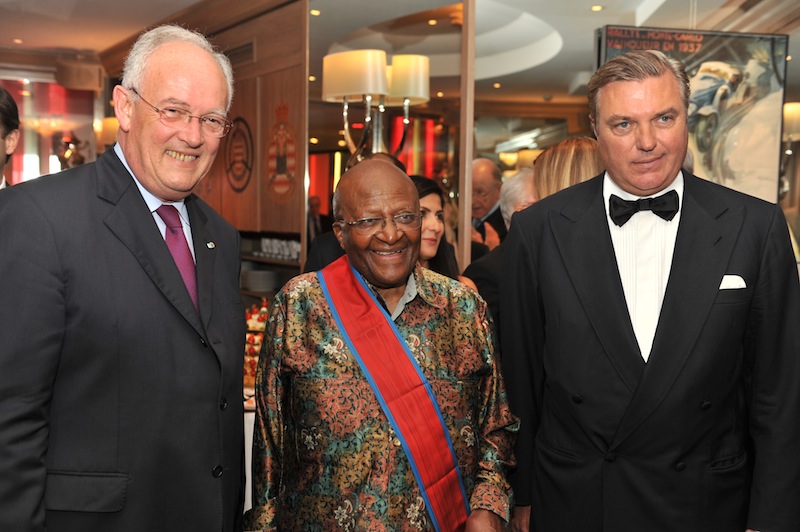 Archbishop Desmond Tutu invested into the Royal Order of Francis I June 5, 2014 – Principality of Monaco. Anglican Archbishop Desmond Tutu, winner of the Nobel Prize for Peace in 1984, received the honor of Knight Grand Cross of the Royal Order of Francis I and the Gold Medal of Merit of the Sacred Military Constantinian Order of St. George by H.R.H. Prince Charles of Bourbon Two Sicilies, Grand Master of the two Orders.

First Black Anglican Archbishop of Cape Town, South Africa, and Primate of the Anglican Church in southern Africa, he reached worldwide fame during the eighties as an opponent of Apartheid .

His message of peace and brotherhood is based on the expression he himself coined: ” Rainbow Nation” to describe South Africa. This term, which refers to the ideal of peaceful and harmonious coexistence among different ethnic groups in the country, was later picked up by Nelson Mandela and became part of the national culture of the country.

Ever an active supporter of human rights for his people,he has always used his responsibility as a Pastor in favor of the oppressed. He fought to eradicate poverty, racism and disease.

Among various other international awards he has also received the Albert Schweitzer Prize for Humanitarianism in 1986; the award “Pacem in Terris” in 1987; the Sydney Peace Prize in 1999; Gandhi Prize for Peace in 2007; the Presidential Medal of Freedom in 2009 and the Templeton Prize in 2013. He has written and published several books containing his speeches and statements. The honor of the Royal House of Bourbon Two Sicilieswas conferred at a ceremony whichtook place at the headquarters of the Automobile Club of Monaco, where various Religious Authorities and Institutions of the Principality were present. In addition to H.R.H. Princess Camilla, accompanying her spouse,the Grand Master, in attendance were also H.E. the Minister of State Michel Roger and other Government Ministers of the Principality; His Grace The Most Rev Mgr. Bernard Barsi, Archbishop of Monaco; Mgr. RenéJuliano, General Vicar for the Diocese; the Director of Judicial Services Mr. Philippe Narmino; H.E.Mr. Hughes Moret, Ambassador of France to Monaco and H.E. Mr. Peter Murphy, Ambassador of the Order of Malta in Monaco. The large audience present was also composed by illustrious personalities from boththe cultural and economic life of the Principality.

During his celebratory speech H.E.MrAnthony Bailey, Delegate for Interreligious Relations of the Dynastic Orders of the Royal House, pointed outthat Archbishop Desmond Tutu has lead an extraordinary life, especially distinguished by his commitment to the defense of human rights and the fight poverty.