750th ANNIVERSARY OF THE DEDICATION OF THE CATHEDRAL OF MONREALE 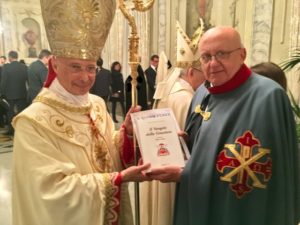 The solemn Eucharistic celebration was presided by His Most Rev. Eminence Cardinal Angelo Bagnasco, President of the Italian and Bali’ Episcopal Conference, Knight Grand Cross of Justice of the Constantinian Order.

Many dignitaries were present, including the President of the Sicily Region, the Vice President of the Regional Assembly, the Mayors of Monreale, Palermo and other cities of the archdiocese, the Prefect of Palermo, the Police Commissioner of Palermo and the Interregional Commanders of the Carabinieri and the Guardia di Finanza, in addition to representatives of the Order of St. Gregory the Great,  the Sovereign Military Order of Malta, the Equestrian Order of the Holy Sepulcher and numerous Knights and Dames of our  illustrious Constantinian Order.

At the conclusion of the ceremony, His Eminence Cardinal Bagnasco met with several knights of the Sicilian delegation who explained in detail their involvement in the project “Crumbs of Health” which supports various Sicilian dioceses on a regular basis.

The Vice Delegate, Nob. Dott. Antonio di Janni, gave to Cardinal Bagnasco a copy of the book “The Gospel of Justice” written by the former Grand Prior, the late Cardinal Mario Francesco Pompedda, and published posthumously. 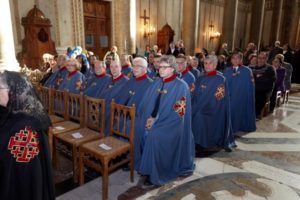 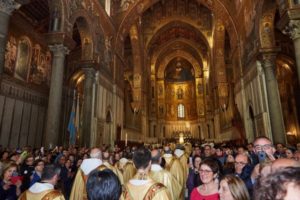