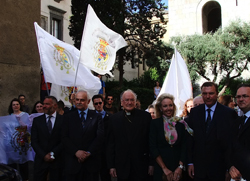 London, June 2012.The Bourbon-Two Sicilies Royal Family, The Duke and Duchess of Castro, Princess Maria Chiara and Princess Maria Carolina spent the long weekend retracing their families history by visiting some of the most important places associated with the former kingdom of the Two Sicilies. The Royal Family visited the magnificent Royal Palace of Caserta which was commissioned by their ancestor King Carlo of Bourbon in the eighteenth century and built by renowned architect Luigi Vanvitelli.

The monument, unique in the world and rivalling in size and magnificence only with the Palace of Versailles, was the scene in 2002 of a royal banquet for over 300 prominent guests from across the world which was held to mark the Baptism of Princess Maria Carolina. Subsequently, the Royal Family visited Salerno and Naples. During the visit, Princess Maria Carolina celebrated her nineth birthday with a visit to Capri and visited the magnificnent ‘Blue Grotto’.