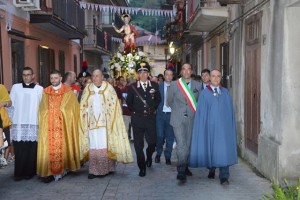 Giffone, Thursday, August 25, 2016 – The Calabria Delegation was invited by the parish priest, Don Salvatore Tucci, to take part in the solemn festivities in honor of St. Bartholomew the Apostle, Patron Saint of Giffone. It was from Giffone that the solidarity tour began one year ago during which the Delegation collected donations of much needed items to be distributed throughout the region. The donations helped to alleviate the sufferings of approximately 600 families, while over 300 needy children received “an extra smile” in the form of toys. The Constantinian participants, led by dott. Rocco Gatto, were warmly greeted as they took part in a procession through the streets of the town with the statue of St. Bartholomew the Apostle, together with the Mayor, Dott. Antonino Cutri.