CALABRIA – MONTH OF MAY 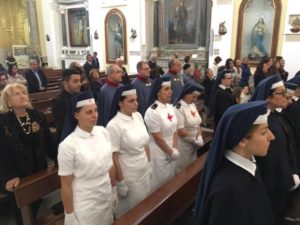 Calabria – On April 27 H.R.H. Princess Beatrice of Bourbon Two Sicilies went to Calabria for a series of official commitments.

After taking part in the inauguration of the Conference “The Antiquity of the Kingdom, archeology, protection and restoration in the pre-unification south” held in the National Archeological Museum of Reggio Calabria from 26 to 29 April, 2017, H.R.H. the Grand Prefect visited the Maritime Headquarters of Reggio Calabria.

She was welcomed by the Commander,  Captain Giancarlo Russo, who explained the many activities  performed throughout the vast territory over which he has jurisdiction (all of Calabria and the Tyrrhenian Basilicata, using the various Port Captain facilities and other peripheral structures), especially the thousands of interventions carried out by the military in guarding the sea and performing rescue operations, protecting the environment, managing the arrival of immigrants, supervising the state owned maritime areas and innumerable other undertakings. For these reasons H.R.H. Princess Beatrice awarded the gold medal of Merit of the Constantinian Order to this Maritime headquarters.

On May 2, the feast of St. Catherine of Siena, the Patron Saint of the Volunteer Nursing Corps of the Italian Red Cross, Representatives of the Calabria Delegation attended Mass in the Church of Santa Maria in the city of Vibo Valentia. 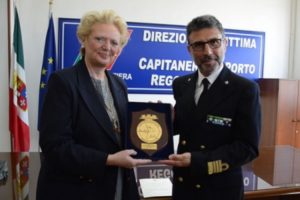 This important religious function was attended by numerous civilian, military and religious authorities, including H.E. the Prefect of Vibo Valentia, the Provincial Commander of the Carabinieri Corps, local military leaders and many representatives of the towns and volunteer associations of the province of Vibo Valentia.

Because of the wonderful volunteer work performed throughout the territory Representatives of the Delegation, led by Vice Delegate Dott. Aurelio Badolati, Knight Commander of Merit with Star, were invited and attended the event.