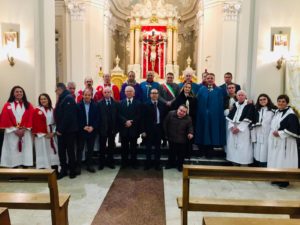 On March 9th, the delegation of Calabria decided to spend a whole day in Monterosso Calabro. In the early afternoon, the delegation, headed by Mr. Aurelio Badolati, vice delegate, went to the town hall where Mayor Antonio Lampasi was waiting for them During the meeting with the mayor, they focused on the importance of the activities carried out in favor of those who suffer. Later, a walk was made in the old town. Later, the Museum of the Rural and Artisanal Civilization of Calabria was visited. At the end of the visit, the Knights made a donation to the poor of the territory at the Church Madonna del Soccorso, in the presence of the parish priest Father Oreste Borrelli. The delegation would like to thank all the friends and supporters of the important Rubro Monte Family Association, represented by President Dr. Giuseppe Crispino and Dr. Antonio Parisi and his family. 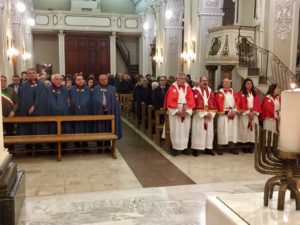