CAMPANIA: MANY ACTIVITIES IN THE PRESENCE OF HRH THE GRAND PREFECT 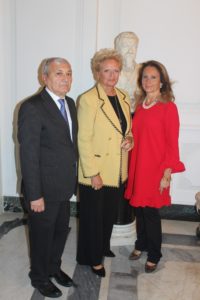 For the improvement of the whole territory, on March 2nd, HRH Princess Beatrice of Bourbon Two Sicilies, Grand Prefect and  Marquise Federica De Gregorio Cattaneo dei Principi di Sant’Elia have made a private visit to the Palace of Portici with the help and support of Alessandro Manna, President of the Association of these royal sites. Accompanied by Eugenio Gervasio, they visited the Wine Museum, which is now under construction. In the early afternoon, a visit was made to Villa Campolieto, property of the Ente Ville Vesuviane, where they were received by the KARMA cultural association that presented to Princess Beatrice their historical show “Alla Corte dei Borbone”, and whose founding members Antonio Raia and Antonio Ruocco, together with the Delegate of the Ente Ville Vesuviane Foundation, accompanied the delegation on a guided tour of the town and its rooms. 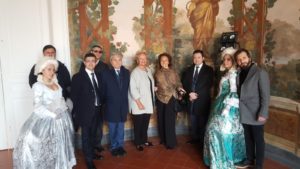 On Sunday, March 3rd, Marquise Federica de Gregorio Cattaneo Dei Principi Di Sant’Elia, Mr. Diomede Gersone and Princess Beatrice sent a recorded message to an Italian-Canadian community that found its own identity as a community in a foreign country in the proximity to the historic Bourbon dynasty and the Southern Italian culture. 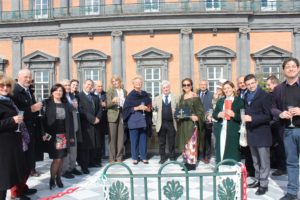 On March 4th, HRH Princess Beatrice of Bourbon Two Sicilies, Marquise Federica De Gregorio Cattaneo dei Principi di Sant’Elia and a large representation of knights of the Neapolitan delegation went to the Royal Palace of Naples, where a ceremony was held to deliver the commemorative plaque of the restoration of the clock on the façade of the Palazzo Reale in Naples, financed by the Neapolitan delegation of the Order thanks to the financial contribution of 5 aspiring Knights, and carried out by the Mr. Michele Torre. The delegate from Naples and Campania has personally followed the coordination with the Superintendency and the relative permits for the restoration and plaque. The delegation received a warm welcome with a welcome cocktail on the beautiful terrace of the royal palace and then made a special visit to the bedroom with frescoes by Carlo and Maria Amalia of Bourbon, always guided by the architect Paolo Mascilli Migliorini, director- coordinator of architectural restoration works for the Royal Palace. The commemorative plaque of the restoration was made by the Delegation of Naples and Campania, which entrusted the work to Mr. Michele Torre, who restored it after 35 years.