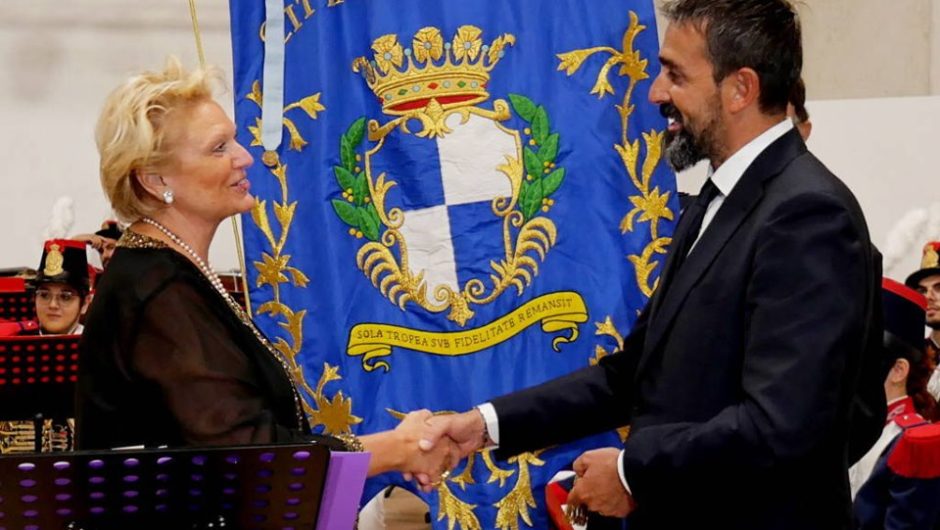 Tropea, October 30th, 2019 – HRH Princess Beatrice of Bourbon Two Sicilies’ presence made Tropea’s solemn investiture ceremony even more unforgettable. During the morning, the Grand Prefect went to Porto Ercole, where the city’s mayor, Mr. Giovanni Macrì and Msgr. Ignazio Toraldo di Francia were waiting for her. Then, Princess Beatrice participated in a guided tour of the historic centre before arriving at the Cathedral of St. Mary of Romania, where she gathered for a moment of prayer in front of the grave of Blessed Father Mottola. Subsequently, the Princess met the confreres of the Congregation and the members of the UNESCO Tropea Club. In the afternoon, the solemn inauguration of new knights was preceded by a ceremony with the declaration of fidelity of the new members of the Royal Philharmonic Academy of Gerace. At the end of this first ceremony, the long procession of knights and dames arrived. The Eucharistic celebration was presided by the Archbishop Emeritus of Reggio Calabria-Bova, Mons. Vittorio Luigi Mondello, Prior of the delegation. The church was full of knights and civil authorities of the region. At the end of the celebration, the concert of the Reggio Calabria Città Metropolitan Band, established by the Royal Philharmonic Academy of Gerace, took place. After the ritual greetings and the exchange of presents, the gold medal of the Order was officially attributed to the city of Tropea.