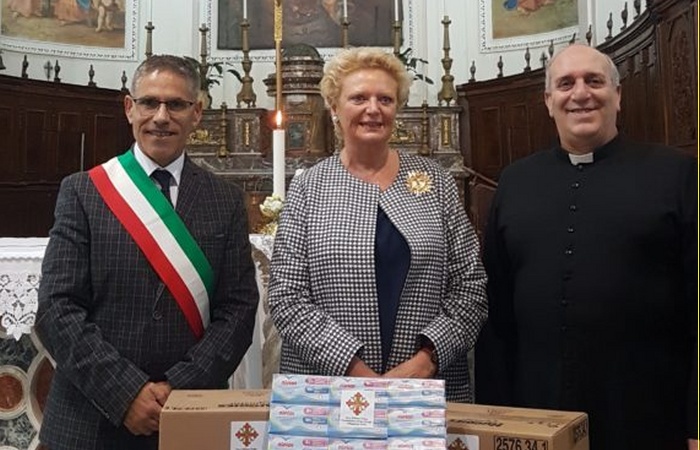 On October 27th, HRH Princess Beatrice of Bourbon Two Sicilies, accompanied by the vice delegate, visited the city of S. Caterina Villarmosa for an important event: the inauguration of a street dedicated to the Constantinian knights, taking into account the humanitarian activities led by the Order and in particular by the Sicilian delegation. Mayor Antonino Fiaccato with several councilors and a large group of knights welcomed the Princess. Caltanissetta referee Antonino Tramontana, promoter of the event and the referent of Enna Matteo Bertino introduced all knights to the Princess. A long procession started from the town hall, in the presence of many citizens, towards the street where the plaque of the “Via dei Cavalieri Constantiniani” was discovered. It was created by an artisan of Monreale, Giosuè Cangemi. Once in the street that was to be inaugurated, the Mayor and the Grand Prefect immediately discovered the tombstone, blessed by the archpriest Father Antonino La Paglia. After the inauguration ceremony, Father La Paglia went to the beautiful Mother Church where the Princess offered products to needy children. In addition, in the Mayor’s Hall, after the donation of the gold medal to the city, Princess Beatrice decorated the banner with it. Princess Beatrice also presented the Mayor with a commemorative medal.