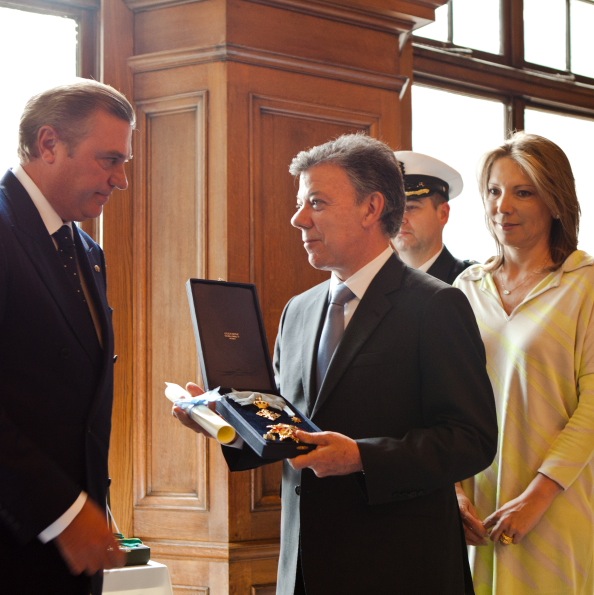 Colombia’s President Santos receives the insigna of the Constantinian Order London, 7 June 2013. A special investiture ceremony took place in London on 7 June 2013 which marked the formal exchange of honours between the Sacred Military Constantinian Order of St George and the Republic of Colombia.

The current and 59th Grand Master of the Sacred Military Constantinian Order of St George, HRH Prince Charles of Bourbon Two Sicilies, Duke of Castro, presented the insignia of a Knight Grand Cross with Gold Star within the Special Category of the Constantinian Order to His Excellency Mr Juan Manuel Santos Calderón, President of the Republic of Colombia.

This award was granted to the Colombian Head of State for his significant and longstanding contribution to peace and reconciliation in Colombia and in recognition of President Santos’s faith inspired contribution to the alleviation of poverty and its associated problems’.

Mrs María Clemencia Rodríguez de Santos, First Lady of the Republic of Colombia, also received from the Grand Master the insignia of a Dame Grand Cross with Gold Star within the Special Category of the Constantinian Order. This award was granted in recognition of her ‘longstanding and significant contribution to charitable and humanitarian endeavour in Colombia with special reference to the improvement of early childhood welfare, her response to those affected by the 2010-2011 severe flooding and other social programmes that she has championed”.

Speeches were delivered by the Order’s Grand Master and Colombian Head of State. The Archbishop of Cardiff, The Most Reverend George Stack, offered the Opening Prayer. The Order’s Delegate for Inter-Religious Relations, HE Mr Anthony Bailey and the Order’s Vice-Delegate for Scotland, Field Marshal The Lord Guthrie of Craigiebank, delivered speeches.

During the ceremony President Santos of Colombia decorated the Order’s Grand Master and Duke of Castro and the Duchess of Castro, with the Knight Grand Cross and Dame Grand Cross of the Order of San Carlos in acknowledging the considerable and longstanding religious, charitable, humanitarian and inter-religious work of the Constantinian Order throughout the world.

This special ceremony, which took place at 45 Millbank London SW1, was attended by over 200 personalities from the world of faith, government, business, politics, diplomacy, culture and the arts. It was jointly hosted by the Grand Magistral Delegation for Inter-Religious Relations and the Delegation of Great Britain and Ireland of the Sacred Military Constantinian Order of St George and the Embassy of the Republic of Colombia in Britain.

This event formed part of President Santos’s wider visit to the United Kingdom during which he was received in audience by HRH The Prince of Wales and held talks with British Prime Minister, Rt Hon David Cameron MP. The London visit also follows the President’s historic visit to Pope Francis in Vatican City last month during which Colombia’s first saint, Mother Laura Montoya, was canonised.

Download the Speech of HE Mr Juan Manuel Santos Calderón, President of Colombia.

Download the Speech of the Constantinian Order Grand Master, HRH The Duke of Castro.

Download the Speech of the Delegate for Great Britain, Mr Anthony Bailey.