CONFERENCE AND BENEFIT EVENT IN THE NEW CHESS CLUB OF ROME 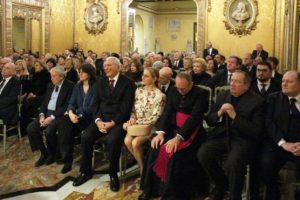 On January 26, 2017, H.H. Prince Lelio Niccolò Orsini d’Aragona,  Knight Grand Cross of Justice, and Dott. Fabiano Forti Bernini, Knight of Merit with Star, members of the New Chess Club of Rome, organized a conference held in the Halls of the Club located in Palazzo Rondinini, via del Corso, Rome. The event was attended by Members and their guests.

The purpose of the benefit event,  which  began with a conference and a display of historical  decorations, was to collect donations for the Parish of San Giacomo al Corso which offers meals to needy people  from Monday through Saturday, from 0830 to 1030.

The Conference, titled “The Sacred Military Constantinian Order of St. George:  Christian Militia and Chivalric Order” enjoyed great success with the audience which included numerous illustrious participants. Speakers at the conference were His Eminence the Most Reverend Cardinal Renato Raffaele Martino, Grand Prior of the Constantinian Order and H.E.  Nob. Dott. Alberto Lembo, Grand Inquisitor of the Order. 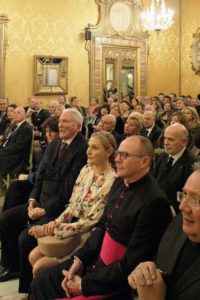 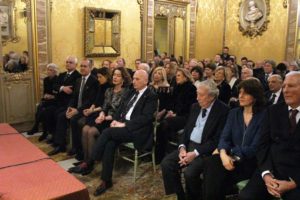 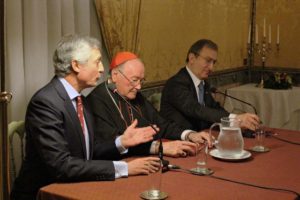 Following the initial greetings by the Counselor Secretary of the Club, Dott. Giovanni Rebecchini,  representing the President,  Marquis Pietro Pelagallo, Knight Commander of Justice, Prince Lelio Ordini d’Aragona thanked the highest officials of the Club who made this cultural initiative characterized by such a strong spirit of charity,  possible. He especially thanked the President, the Council Member and Secretary, the Council Member for Culture and the Library, Prof. Benedetto Marino, and the entire organizing committee composed of Members Marquis Giuseppe Ferraioli di Filacciano, Marquis Gluglielmo Gugliemi delle Rocchette, Prof. Giancarlo Puddu and Giacomo Massimo Brancaccio. 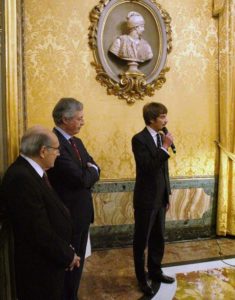 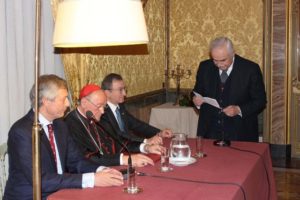 He then yielded the floor to Ambassador Count Giuseppe Balboni Acqua, club member and Secretary General of the Order and of the Royal House of Bourbon, who conveyed the greetings and thanks of H.R.H. Prince Charles of Bourbon Two Sicilies, Duke of Castro and Grand Master of the Constantinian order.

Following the brilliant remarks by Cardinal Martino and Dott. Lembo, Dott. Fabiano Forti Bernini took the floor and spoke of Emperor Constantine and consequently the origin of the very concept of art as we understand it today and provided a detailed  description of the exhibit in the Gallery. He then introduced the benefit event that was the purpose of the evening, inviting Don Giuseppe Trappolini, the Paris priest of San Giacomo al Corso to speak, who spoke of meals prepared for and served to the needy in the premises of the Parish six days a week.

Following the conference, attended by more than 160 members, all participants proceeded to the frescoed Galley of the Club where, thanks to Dott. Andrea de Giorgio who provided his private collection, the members  were treated to the exhibit “Masterpieces of Neapolitan Goldsmith’s Art: decorations of the Kingdom of the Two Sicilies between 1700 and 1800”. The exhibit was greatly enjoyed by all present. 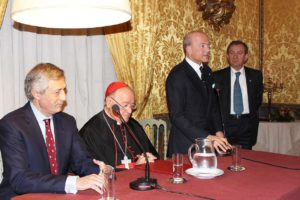 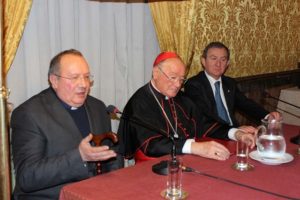 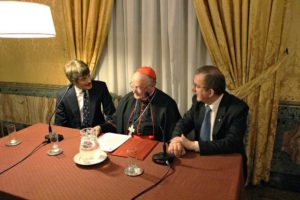 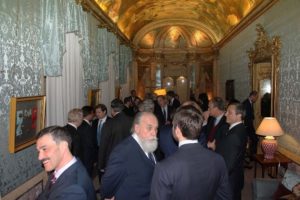 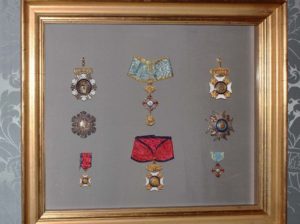 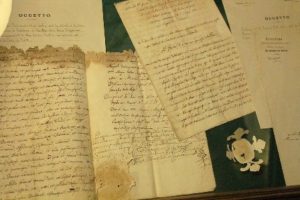