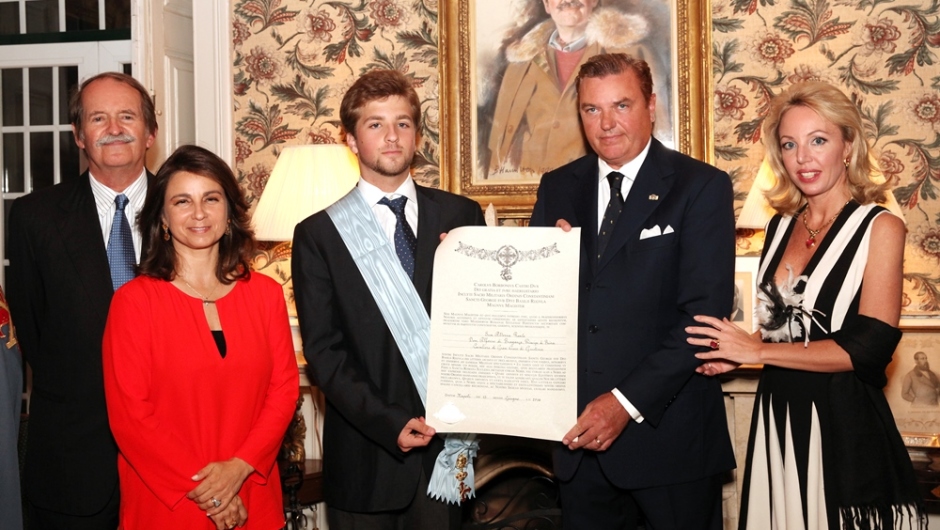 The Royal Family of Bourbon Two Sicilies with H.R.H. the Duke of Bragança at the Shrine of the Our Lady of Fatima

Several the reasons for this three-day visit to Portugal, including the participation of the Royal Family to the traditional festivities in honor of the Saint Queen Isabel of Coimbra, along with the Royal House of Bragança.

During a reception at the Duke and Duchess of Bragança’s home in São Pedro de Sintra, the Duke of Castro, 59th Grand Master of the Sacred Military Constantinian Order of St. George, has invested H.R.H. Dom Afomso de Bragança, Prince of Beira, as Knight Grand Cross of Justice.

Highlights of the visit were, in the morning of July 4th the pilgrimage to the Shrine of Fatima, and in the afternoon the Lithurgy Mass of Saint Isabel celebrated in the Convent of Santa Clara in Coimbra, during which H.R.H. the Duchess of Castro received from the Grand Master H.R.H. the Duchess of Braganza the Insigna and Diploma of Dame Grand Cross of the Royal Order of Saint Isabel.

At Fatima, the Royal Family has offered prayers to Our Lady of Fatima at the small Chapel of the Apparitions, and then visited the Royal Lipsanotheca, an exhibition of relics of the Foundation Oureana / D. Manuel II, presented by Mr. Carlos Evaristo, Expert of relics and Chairman of the chapter of the Patrons of the Vatican Museums, with particular emphasis on the relics of the Seers of Fatima, the Sicilian Saints and the Major Relic of the Blessed Maria Cristina, Queen of Naples, recently beatified by Pope Francis.

H.R.H. the Duchess of Castro after receiving the Order of Santa Isabel with her daughters T.R.H. Marie Caroline, Duchess of Palermo and Maria Chiara Duchess of Capri and the T.R.H. the Prince of Beira and the Duke of Porto

The Royal Family of Bourbon Two Sicilies with H.R.H. the Duke of Bragança and Dr. Carlos Evaristo with the relics of the Ourem Reliquary including the Bust of Blessed Mary Queen Christina of the Two Sicilies

The day ended with a dinner in honor of the T.R.H. Duke and Duchess of Castro, set in the beautiful surroundings of the Castle Forte da Cruz on the Estoril Coast residence of Dona Diane Barros de Polignac and Dr. Miguel Horte e Costa, Baron of Santa Cumba Dão.

Tweet
Previous articlePress Release – Appointment of the President of the Magisterial Heraldic Commission
Next article COLLEGIATE MEETING BETWEEN THE GREAT OFFICERS, THE DELEGATES AND THE REPRESENTATIVES – 12, 13 and September 14, 2014