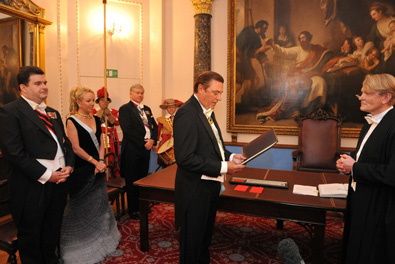 Freedom of the City of London award to Constantinian Order Freedom of the City of London award to Constantinian Order

Their Royal Highnesses signed the Freemen’s ledger during a ceremony held at Stationers’ Hall after reciting the Declaration of a Freeman. Afterwards, the Duke and Duchess were greeted as a ‘Citizen of London’ by Murray Craig, the Clerk of the Chamberlain’s Court, and presented Prince Carlo and Princess Camilla with their framed parchment certificates.

Mr Craig explained to the Duke and Duchess the meaning of the Freedom and invited them to look at a small display of high-level Italian and British statesmen who had received the freedom during the past 200 years. Among the 250 guests attending the ceremony were Cardinal Renato Raffaele Martino, Cardinal Cormac Murphy-O’Connor, Archbishop Vincent Nichols of Westminster and the Apostolic Nuncio to the Court of St James’s, Archbishop Antonio Meninni, Sir Gavyn Arthur, former Lord Mayor of London, and HE Mr Anthony Bailey, Delegate for Great Britain and Ireland of the Constantinian Order who nominated the Duke and Duchess of Castro for the Freedom.

The Freedom of the City of London is believed to have begun in 1237 and enabled recipients to carry out their trade; and today, people are nominated for the Freedom, because it offers them a link with the historic City of London and one of its ancient traditions or to to pay tribute to their outstanding contribution to the city of London.