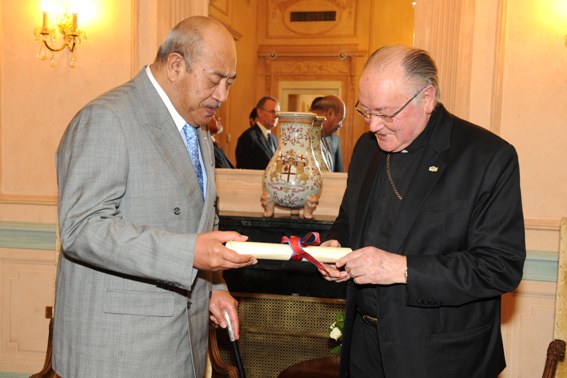 His Eminence and His Majesty held cordial talks on furthering co-operation between the Constantinian Order and the Kingdom of Tonga. Cardinal Martino recalled his past visit to Tonga – a country where Roman Catholics in the south pacific nation number some 16%. The King also paid tribute to the role and contribution of the Catholic community to Tongan society.

Among other issues discussed were the role of faith in Tonga and the wider pacific region, inter-religious understanding and the joint desire to further cooperation at all levels between Italy and Tonga.
The Ambassador of the Kingdom of Tonga to the Italian Republic, HE Mr Sione Ngongo Kioa and Mr David Dunkley, Principal Private Secretary to the Tongan monarch were among the members of the Tongan delegation present during the one hour meeting which was followed by a reception.
The Constantinian Order delegationin attendance on the Grand Prior were the Secretary General of the Royal House of Bourbon Two Sicilies, HE Ambassador Giuseppe Balboni Acqua, KCVO, the Grand Magistral Delegate for Inter-Religious Relations, HE Mr Anthony Bailey and his wife HSH Princess Marie-Therese von Hohenberg, Dr Alberto Calafato Janelli, Private Secretary to The Duke and Duchess of Castro and Mr Vincenzo Giovagnorio Head of the Protocol of the Sacred Military Constantinian Order of St George.
During King George V Tupou’s visit to Rome His Majesty also paid an official visit to the Holy Father, Pope Benedict XVI in the Vatican City and held talks with HMEH Frà Matthew Festing, Prince and Grand Master of the Sovereign Military Order of Malta at the Palace of Malta in Rome.