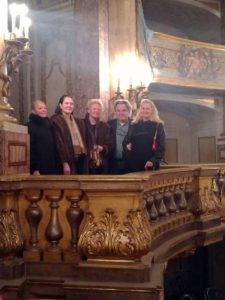 The month of January began with a private visit to Naples by H.R.H. Princess Beatrice of Bourbon Two Sicilies, Grand Prefect of the Constantinian Order.

Her Royal Highness visited Naples together with several prestigious guests  interested in the Royal Bourbon sites and the history of the great and valuable creations produced by the Royal House, such as the ancient silk works of San Leucio and the Capodimonte porcelain.

The Delegate assisted the illustrious guests by organizing several visits, including to the National Archeological Museum of Naples, where there was an exhibit on Charles of Bourbon Two Sicilies and as well as a display of several pieces lent by H.R.H. Prince Charles of Bourbon Two Sicilies, Duke of Castro and Head of the Royal House. The group also visited the Zevallos Palace to see the extraordinary exhibit of Salvatore Fergola, painter for the Bourbon Court. They were  accompanied and guided by a descendant of the painter and well known antique dealer, Luigi Schisano, Knight of Merit with Star.

After visiting the Royal Palace of Caserta and the San Leucio silk works, the Princess and her guests, three important patrons and lovers of music and art history, enjoyed a “typical” dinner, a sumptuous meal with all the elements that are so characteristic of the Parthenopean tradition, as guests of notary Cappelli.  In addition to the Delegate of the Order,  Marchioness Federica de Gregorio Cattaneo of the Princes of Sant’Elia, invited guests also included two professors from the Faculty of Architecture, University of Naples, currently working on a project on the “Grand Tour”  and who explained a great deal about the history of art in the city of Naples.  On the following day, the Marquises Leopoldo and Federica de Gregorio Cattania of the Princes of Sant’Elia hosted a reception for Princess Beatrice and her guests in their residence at Palazzo Ischitella. Also invited were the Council members of the Naples and Campania Delegation and several guests from the more important cultural associations of the city, including the “Friends of Capodimonte”. 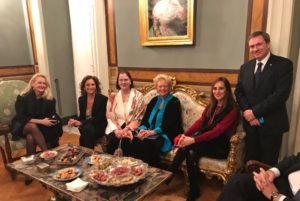 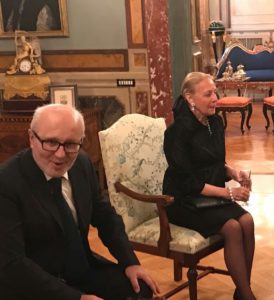