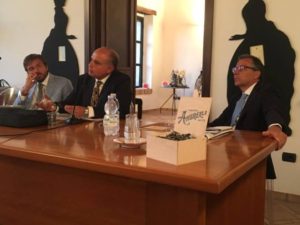 On August 12 the Calabria Delegation assembled once again in the city of Rossano thanks to the generous hospitality of the Amarelli Company. The day was filled with events, beginning with a visit to the splendid Amarelli Museum, followed by Holy Mass officiated by Vice Prior, Monseigneur Antonio Morabito, in the Patrician Chapel of the Amarelli Factory.
The final event of the day was a conference on the subject: “Post-Unification Brigandage: History and Legend”.
Mr Giuseppe Spizzirri Marzo opened the conference in his capacity as representative for the city of Cosenza, offering suggestions and ideas on the subject of the conference and on the activities of the Order. He was followed by Knight Fortunato Amarelli who, as “official host”, thanked all present, including the many Knights and Dames who participated.
There followed presentations by Dott. Domenico Marino, journalist, and Dott. Riccardo Greco, Knight of Grace and President of the Juvenile Court of Bari, both of whom spoke of the merits of those who chose the path (and the life) of brigantry in defense of a people condemned by events and by history.
The moderator of the conference was Knight Commander Aurelio Badolari, Vice Delegate of Calabria who, after thanking the Amarelli family for its hospitality, described some of the activities of the delegation on behalf of the less fortunate of the region. 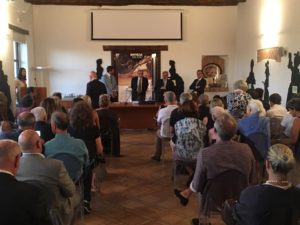 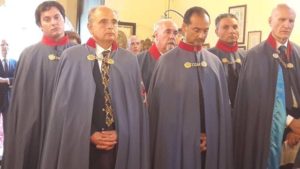 Tweet
Previous articleMESSAGE OF HIS EMINENCE THE GRAND PRIOR ON THE FEAST OF THE EXALTAITON OF THE CROSS – 14 SEPTEMBER 2017
Next article LOMBARDY – DONATION OF A RELIC OF ST. GEORGE