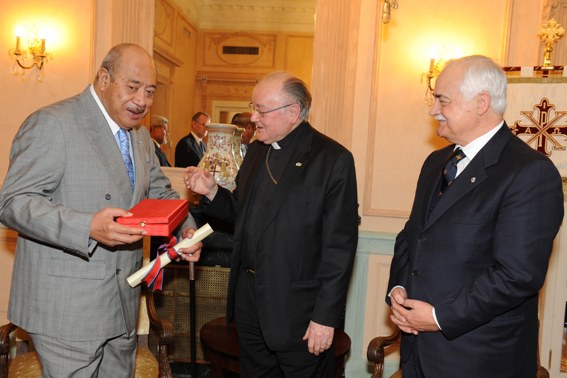 Rome – 28 February 2012. By decree of the Grand Master, HRH The Duke of Castro, His Majesty King George V Tupou of Tonga was invested as a Knight Grand Cross of the Royal Order of Francis I in recognition of the warm ties, which exist between the two Royal dynasties.

The Tongan monarch, who is a Methodist, was also awarded the Gold Benemerenti Medal of the Constantinian Order in recognition of King George’s efforts to defend and protect the Christian faith in Tonga and for his global contribution to further greater inter-religious understanding.

The two high awards were presented to King George V Tupou by the Grand Prior of the Constantinian Order, His Eminence Renato Raffaele, Cardinal Martino, in the presence of senior officials from both sides.

Cardinal Martino also presented on behalf of the Grand Master the insignia of the Knight Grand Cross of Merit of the Constantinian Order on Mr David Dunkley, Private Secretary to the King and the insignia of Knight Commander of the Royal Order of Francis I on the Ambassador of the Kingdom of Tonga to the Italian Republic HE Mr Sione Ngongo Kioa.