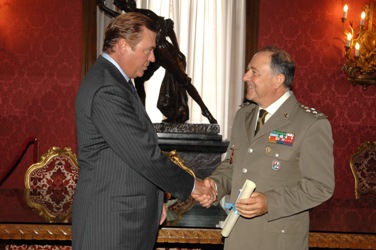 Rome, 16 September 2009. The Lieutenant General Aldo Cinelli, Secretary General and Director of the weaponries of the Ministry of Defense received the insignia of Knight of Grand Cross of Merit of the Sacred Military Constantinian Order of Saint George.H.R.H. the Grand Master paid an official visit to the site of the Italian Army where he was received by the General Potito Genova of the General Secretariat who lead his Royal Highness to the office of the Lieutenant General Aldo Cinelli for a brief meeting. Following the reunion the Grand Master signed the guest book of honor and made his entrance to the Palace Hall with Lieutenant General Cinelli for the investiture ceremony. Among those present were the director of the General Secretariat and some other guests of the Cabinet of the Minister of Defense. H.R.H. was escorted by HE Marquis Aldo Pezzana Capranica del Grillo, Grand Chancellor, HE noble Ambassador Giuseppe Balboni Acqua , Secretary General of the Order; Prof. Leonardo Saviano Secretary General of the Royal House and Constantinian Knight Vincenzo Giovagnorio Ceremonial Attendant of the Order. Following the ceremony the Lieutenant General Aldo Cinelli held a speech in which he expressed his warm thanks to His Royal Highness.