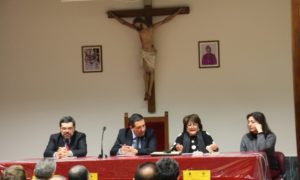 Locri, 1 January 2016 – As part of the cultural activities of the Calabria Delegation, and with the cooperation of the Association of the Two Sicilies, the pamphlet by Teodoro Salzillo “Roma e le menzogne parlamentari nelle Camere de’ Comuni di Londra e Torino” (Rome and the Parliamentary lies in the Chambers of Commons of London and Torino) was presented in the Bishopric Seminary of Locri.
The work, printed for the first time in 1863, was a critical review of several of the speeches made during the unification of Italy in the Chambers of Torino and London, highlighting the figure of King Francis II, the young sovereign living in exile in Rome.
The considerable public in attendance included numerous Knights, Dames and Volunteers of the Delegation.
Since it was the 122th anniversary of the death of the King of the Two Sicilies, at the conclusion of the meeting a Requiem Mass was celebrated in the Chapel of the Seminary in honor of H.M. Francis II of Bourbon and the victims of the Kingdom of the Two Sicilies. The Mass was officiated by the Rector, Don Nicola Commisso Meleca. 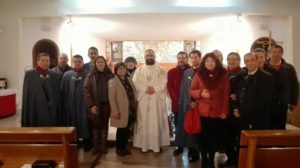