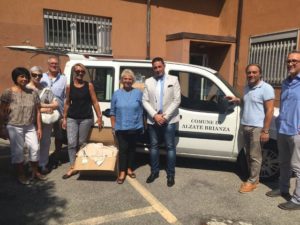 Brianza, 3 August 2017 – This morning a group of Knights from the Lombardy Delegation met with the Mayor of Alzate Brianza, Massimo Gherbesi, to deliver coats and sweaters for the Municipal Clothing Dispensary.

Present for the donation were Counselor Daniela Maroni, the Mayor of Alzate Massimo Gherbesi, Knight Luigi Rogliano, representing Lecco, Selectpersons Regina Mauri and Sergio Molteni, the Mayor of Monguzzo, Marco Sangiorgio, the representative for the San Vincenzo De Paoli Association Valentina Zanussa and volunteer Patrizia Agliati. This donation is intended to support the Municipal Clothing Dispensary that, together with the towns of Anzano del Parco, Monguzzo, Orsenigo and Alserio, has created a circuit of assistance and support to needy families who will be able to request clothing. The items will be delivered anonymously by volunteers.
“This is an undertaking that I have initiated because it is only with tangible gestures that we can provide some relief to people in difficulties – explains Counsellor Daniela Maroni – The meeting with the delegation of the Constantinian Order of Saint George was important because it is thanks to their assistance that I was able to distribute thousands of items of clothing. We will shortly also be going to Bassone to bring dozens of items for the female section of the Institute.

In September we will also be able to donate toys and school supplies. I believe that one gesture is worth more than a thousand words”.

The activities carried out by the town of Alzate Brianza are worthy of note as, in addition to supporting these direct donations, it also collaborates with the Gemma Project of Costamasnaga which focuses on the needs of small children and with the initiative of young people who use their vacation time to travel to poor villages in other continents to offer their assistance. They are provided with gift packages containing clothing to be distributed to hospitals or shelters.
Regional Counsellor Daniela Maroni issued a press release (No. 27/17) to publicize an additional donation of 1600 items of clothing for the solidarity center of Como, provided by the Sacred Military Constantinian Order of Saint George, thanks to the support of Vice Delegate Mr Giuseppe Rizzani and the Knights and Dames of the Delegation. 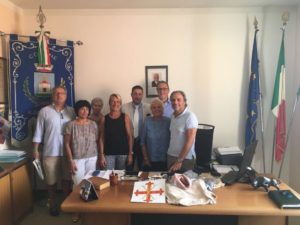 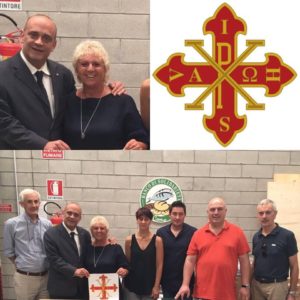 Tweet
Previous articleACTIVITIES OF THE SICILIAN DELEGATION IN THE MONTH OF JULY
Next article DELIVERY OF ESSENTIAL SUPPLIES, PISA