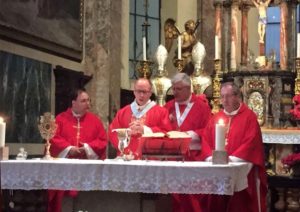 Friday, April 21. The Knights and Dames of the Lombardy Delegation attended holy mass in honor of St. George the Martyr, patron saint of the Constantinian Order. The mass was celebrated in the illustrious church of San Giorgio al Palazzo in Milan.

This year the celebration was held on April 21st rather than actual day of the Liturgical Memory, April 23rd, as this year the 23rd was a Sunday and the Feast of the Divine Mercy would have taken precedence.

The mass was celebrated by the Prior of Lombardy and Secretary General of the Office of the Grand Prior, Mons. Arnaldo Morandi, concelebrated by the deputy secretary of the Office of the Grand Prior Mons. Pierantonio Bodini,  the Chaplain of the Monza Brianza Delegation, Don Michele Somaschini and Don Andrea Dotti,  Rector of the episcopal college of St. George in Brescia.  Present for the ceremony were H.E. the Grand Inquisitor, Nob. Dott. Alberto Lembo, H.E. the Grand Treasurer, Don Giancarlo of the Princes Rocco di Torrepadula, the Vice Delegate for Lombardy, Nob. Dott. Giuseppe Rizzani, the Delegate for the Triveneto region, Count Roberto Giustiniani, as well as numerous representatives of Lombardy and many illustrious Knights and Dames from other Delegations.

The Provost of San Giorgio al Palazzo, Mons. Gianni Zappa, who is also the Diocesan Assistant for Azione Cattolica and Moderator Curiae of the  Milanese Diocese, began the celebration by welcoming the Constantinian Knights and Dames with great courtesy and consideration, using the expression: “Welcome, in fact welcome back…”.

For this special occasion Mons. Zappa decreed the display of the renowned sacred relic of St. George during mass and use of the precious historical chalice donated to the parish by Blessed Pope Paul VI, bearing the likenesses of St. George, the Vatican Basilica and Pope Leo XIII who was Pope when the sacred vessel was made.

Mons. Arnaldo Morandi donated an ancient bronze statuette of the Madonna of the Duomo to Mons. Gianni Zappa on behalf of the Constantinian Order and an initial financial aid to the Caritas of the parish of St. George.

The Constantinian Order flourished in the Milanese Archdiocese during the post-unification era, as confirmed by the comments of Cardinal Eugenio Tosi, Knight Grand Cross of the Order since 1923, who issued a Decree in 1931 establishing the religious center of the Sacred Militia in the Church of San Giorgio al Palazzo.

Worthy of note is the large commemorative plaque on the right wall of the transept. The plaque was placed by the Constantinian knights on June 13, 1978, in memory of the Edict of Milan promulgated by the Emperor Constantine in this very site in the year 313.

The delegate for Lombardy, Don Andrea Imperiali of the Princes of Francavilla had charged the Vice Delegate and the Prior of the Delegation to contact the current Provost of St. George, Mons. Gianni Zappa, to discuss the  possibility of continuing to use the church of San Giorgio al Palazzo as the illustrious temple for the celebrations of the Constantinian Order as was done in the past under his predecessor, Mons. Giampietro Crippa, Prior Emeritus of the Lombardy delegation. 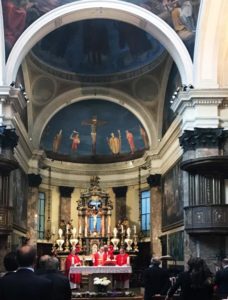 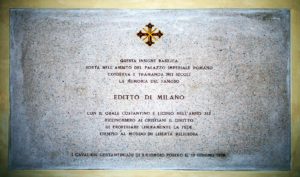 Tweet
Previous articleCRUMBS OF HEALTH IN NOTO AND PALERMO
Next article LAZIO – FEAST OF ST. GEORGE