CRUMBS OF HEALTH IN NOTO AND PALERMO 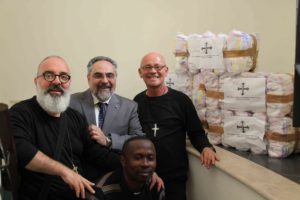 Sicily – On Saturday, April 15, the project Crumbs of Health was implemented in Noto by a donation of numerous items for children ages 0 to 3. The contribution was delivered by Comm. Marcello Cantone who was warmly thanked by His Most Rev. Eminence Mons. Antonio Staglianò, Bishop of Noto and Knight of Ecclesiastical Grace.

The donation included items collected by the Delegation of Calabria. On Thursday, April 18 the weekly collaboration with the soup kitchen established by the church of S. Mamiliano in Palermo continued with a contribution of a significant quantity of fish to be cooked this week by volunteers.

The soup kitchen was established in June 2016 by Father Bucaro, the parish priest of S. Mamiliano and distributes 100 take away meals daily for the indigent. The meals are provided from 1230 to 1300.

On 18 April a Sicilian  Delegation replied  the initiative at Santa Caterina Villermosa (CT), giving the municipality more than 100 kg of pasta for the food counter.

The next day, however, the project made a stop at the premises annexed to the church of Maria SS of the Agonizzanti di Monreale where children’s goods were distributed to about 50 families reported by the monrealese curia. Easter eggs and classic martoran sheep were also distributed to celebrate Holy Easter